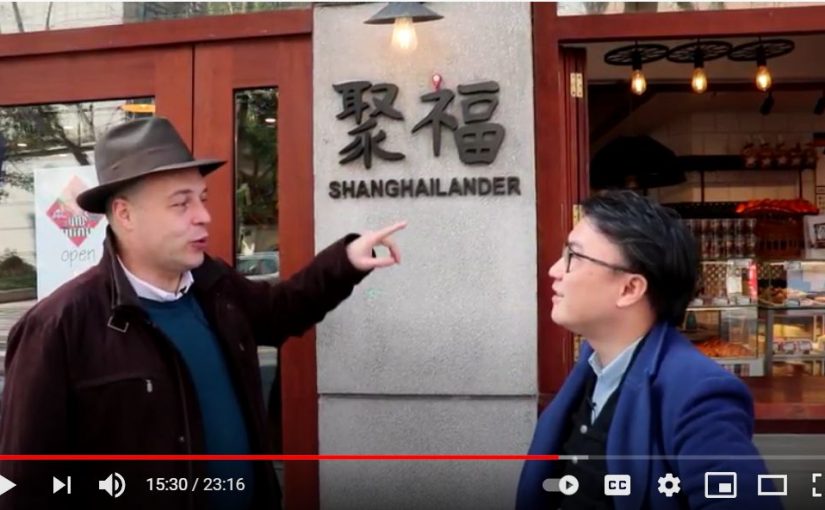 Francophone Chinese stand-up comedian Li Song has got really popular in the French community in Shanghai, and with China focused people in France and French speaking countries.

He launched in career with the stand-up show “Chroniques du débridé” in 2018. The weekly Show “Le Journal du débridé” started in 2020. I was invited to be part of #11, released on 27th Feb 2021 (the part on Shanghailander.net starts at 13:50). The show is available on Youtube and Wechat.

Having lived in Shanghai for more than 16 years, I have seen tremendous changes in the city and the mentality of its inhabitants, in particular regarding the city’s past. The attitude has changed tremendously, with a new trend for collecting the past and old artefacts, as shown in a recent Sithtone article on the topic.

During my first trip in 1998, Shanghai was for from being the trade center it is today. The city was still pretty much emerging from it’s 40 years sleep, at least in terms of architecture. There was many cranes and construction, and I did not pay any attention to the past.

It’s a few months after I came back in 2004, that I started to get interested in Old Shanghai. It must have been on a March or April walk on the former Rue Lafayette (today Fuxing Lu), that things started to piece together. There was very few books on the topic, and finding them in Shanghai was not always easy. I remember that the first real book I read about Shanghai history was 2000 Stella Dong’s “Shanghai, the rise and fall of a decadent city”. I started to collect items from the old Shanghai period from 2005 or 2006, going to antique and later book markets. This lead to the creation of this blog in July 2006 (original called Shanghai Old and New, see opening post) and was weird enough to attract the attention of a reporter from Shanghai Daily, and a number of others later.

Having told the story of Shanghai many times, I can see that a younger generation of Shanghainese is getting interested in their own city and its history. Some of my friends believe that Shanghai antiques could become the new trend for people here. I am not sure about it, but I still enjoy researching this incredible period of Old Shanghai.

The territory that formerly covered by Old Shanghai is today separated in several Shanghai districts. With a large share of the former French Concession on its territory, Xu Hui district has been the leading district for history preservation. I recently came across this article mentioning the renovation plan for this part of the city.

The article also mentions an exhibition about the revival on “old skills” related to construction, that were used to build these old houses. This exhibition looks interesting and I will surely visit it. It is really nice to see that after years of destruction or ruinovation, preservation has become a matter of interest.

At the same time, while those old skills have been lost in China and have now to be rediscovered, I cannot fail to notice that they are still available and used in Europe and other parts of the World. Several European countries, have been involved in restoration programs in Shanghai in the past. Maybe one does not need to look back for those skills to be “reacquired through the demolishing campaign on some damaged houses”… just ask other people involved in preserving similar skills elsewhere. I am sure they would be glad to help.