In post Shanghai Milkman, I wrote about milk delivery in Old Shanghai, and Culty Dairy, a farm located in the former French Concession. Culty dairy was advertising its products in the “Journal de Shanghai”, the French newspaper in Old Shanghai. Below ad is from 8th December 1928.
“Culty milk. Drink it daily brings good health”. Simple but effective!

One of the latest post on Shanghailander, was focusing on milk distribution in Old Shanghai (See post “Shanghai Milkman” for more details). Among other things, I was showing an antic milk box from Culty Dairy. Soon after publication, a Shanghai antic dealer came to me with pictures of another milk box, from a different dairy company.

The box is much bigger than the Culty Dairy one, so maybe it was for a large family.

Sung Sung Dairy (生生牧场) was located at 175 Great Western Road (大西路175号), now the parking of Longemont hotel on West Yan’an Rd, close to Panyu Rd and to the Columbia country club (now site of modern Columbia Circle). In the 1947 Shanghai telephone directory, it was listed as Sun-Shine dairy. 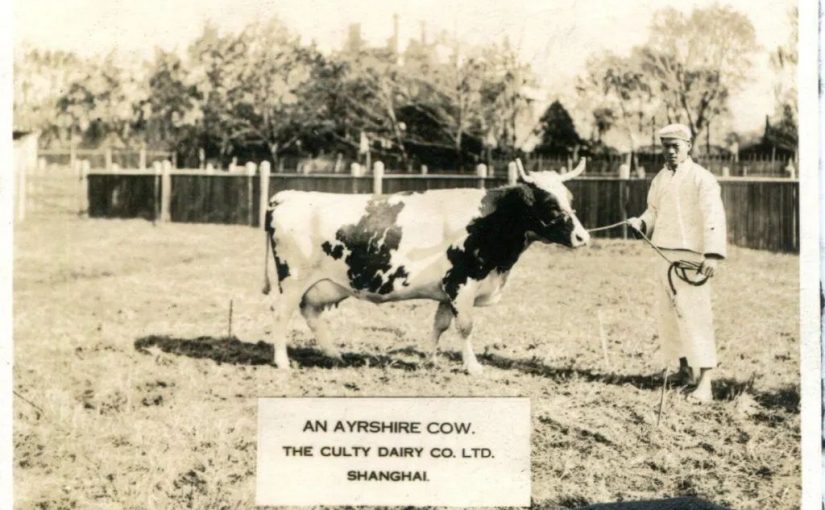 Daily milk delivery has been a feature of English life since the end of the 19th Century. The milkman service was a full part of British culture, with 94% of the milk consumed delivered by the door in 1974. This is probably best illustrated by the 1966 British hit “No Milk Today”. Similar service was also available in Holland and in the USA. Being of such importance in the UK, it is of no surprise that a milkman service was available in Old Shanghai. What is more amazing, is that the service has survived in Shanghai and is still available nowadays.

Milk and milk products were an essential trade for European settlements in Asia, including Old Shanghai (see post “milk and butter” for more details). As the population of Old Shanghai grew, European farming was developed to supply local customers, including dairy products. They were quite a number of dairy farms in Shanghai, including the Liberty Diary on Connaught Road, in the International Settlement (today Kanding Lu), the Standard Milk Company on Great Western Road (today Yanan Xi Lu), or Model Diary Farm on Tifeng Road (today Wulumuqi Bei Lu).

The most famous then and today being probably the Culty dairy, located at the corner of Avenue Joffre and Route Culty, today’s location of Shanghai librairy on Huai Hai Zhong Lu. It was a few step away from Hungarian architect Béla Matrai’s home and most well know building.

Just like in the UK , milk was delivered daily in glass bottles. Every customer received a small metal box that was hanged outside the house, like the one pictures below. Early morning, the milkman would come, collect empty bottles from the previous day and put filled bottle instead. Bottles were normally half pints, i.e. 236 ml. Milk was delivered and consumed within a short time, it did not really need refrigeration.

Although milk is now mostly sold in cartons, using refrigators, the milkman service is still available in Shanghai, with milk delivered early morning daily. The little box is made of plastic, not of metal anymore but form and function are similar. Glass bottles are 195 ml, that is pretty close to the half pint.

Since very little packaging is used, this is also an environment friendly way of getting your milk. Bright food group was born form the merger of several food companies in Shanghai, including the Yimin N1 food company, the original ice cream company in Shanghai. They probably also included some of the former dairy farms and milk company, including Sun-Shine dairy, so service continued all those years. Bright also owns the Aquarius water and soda brand, that was available in Old Shanghai.

Now that I am regular customer, I enjoy my daily milk just like in Old Shanghai. This is a revival experience, similar to enjoying unchanged palmier from Park Hotel, or having lunch in Old Shanghai Deda Cafe.