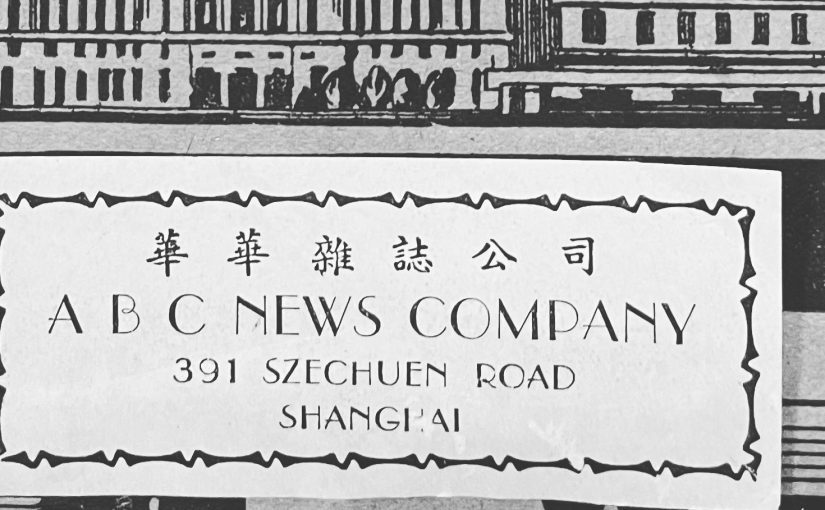 Library and bookstore were the place to get news and culture in Old Shanghai. There was quite a number of official libraries including the Royal Asiatic Society library on Yuan Min Yuan lu, the Ziaccawei Bibliotheca Sinica near the Xu Jia Hui cathedral and the Shanghai library (located in Jiangwan district). There were also a number of private libraries, including Hung Ying Library located on Avenue Joffre (today Huai Hai Lu), and Hezhong library on Rue Bourgeat (today Changle lu).

Foreign bookstores were the place to buy books and newspapers in English and other foreign language stores. The biggest and most well known was the World Book Co building, today’s Foreign language bookstore on 390 Fuzhou lu, as well as Kelly & Walsh (that is still active in Hong Kong nowadays). Another famous one that I recently discovered was ABC News Company.

Located on 391 Szechuen Road, the ABC News Company opened its store 1 August 1936, as mentioned in a China Press article. It was located at the corner of Szechuen Road and Nanjing Road. The article mentioned the location as “opposite Whiteaway, Laidlaw and opposite Hall and Holtz Man’s Shop”, both department stores being very famous in Shanghai, the location was excellent.

ABC News Company also had a large section of Children books, as well as games and puzzle, crayons and painting boxes. It also carried a large range of stationaries, including account books, “check writers, pencil sharpeners, punches, staple machines, ink and pencils”. Well known brands of pen like Parker and Waterman were also available. They also sold maps of the city, like the one below.

Being one of the leading book, newspapers and stationary store in the Shanghai business district, ABC News Company was surely one of the first places to visit for newcomers. This particular one is from 1945, with the publishing year written below the ABC News company label. It was not published by ABC News, but sold in the store. The map was sold in the above envelop with a Art Deco / modernist pattern. It is not surprising to have the Bund’s HSBC building and the customs building on the cover as they were the symbol of Shanghai.

Arriving in Shanghai in the late 1930’s, a map was pretty necessary to go around the very large city. I am sure this map was sold along books like the “All about Shanghai Guide“, the “Shanghai Dollar Directory” or Carl’s Crow books including “400 million customers” and “Hand book for China”.

One of the difficulties of researching Old Shanghai, is using the old street names references found in historic books, with today’s street names that are totally different in most cases. Long are gone the signs for “Avenue Joffre” and “Rue Lafayette”, and finding a small street on the most accurate maps can be challenging.

La Société d’histoire des Français de Chine, a group of French expats in Shanghai, researching the city’s history (www.histoire-chine.fr) have recently come up with a very useful to solve this issue. Their new online tool is an Old / New Shanghai street search engine.

It is extremely easy to use, just type the street name you are looking for, and the related names will come up immediately, both Old and New Shanghai names. This makes it practical and very useful. The search engine can be found at http://www.histoire-chine.fr/streets-of-old-shanghai/

Much lower tech but very complementary is Paul French’s “Old Shanghai A-Z”, that includes a lot of information about the history of Old Shanghai street names.

John Pal’s Shanghai memoir, Shanghai Saga, has been recently republished by Earshaw books. Readers can now enjoy the story of John Pal, customs officer turned journalist at the Shanghai Times, just like I did when I first read it. Details are in original post Shanghai Saga.

The story of the 20.000 Jews from Central Europe who took refuge in Shanghai in 1938 to 1939 has been documented quite a number of times in the last decade. Although it was not so well spread when I started this blog, it is now recognized in and out of Shanghai, including in the Shanghai Jewish Refugees Museum in Hong Kou district.

What is less well known is how they all left China, while some of them remained in Shanghai until the early 50’s. A number of books have been written by some of the people who went through it all, including the excellent “Stateless in Shanghai” from my friend Liliane Willens. However, they tend to focus on individual stories. It also seem that people went on with their new life and wanted to put it all away, until many years later when some wrote their own story.

This is where the recent article from Jewish News of Northern California is interesting. It shows how a place like San Francisco organized a welcoming effort for those refugees after leaving Shanghai. Another interesting point is that a number of those people stayed in San Francisco, and recreated a little bit of Shanghai way of life there, just like they tried to recreate some of their European life a few years before in Shanghai. In that case, it was not only individuals that moved, but a whole community that recreated itself and continued to exist many years later carrying the Shanghai spirit with them, long after having left the city.

The article can be found at: https://jweekly.com/2022/08/17/75-years-ago-this-week-san-francisco-was-port-of-hope-for-jewish-refugees-from-shanghai/