Located at the corner of Huai Hai Xi lu and Fuxing Xi Lu, the Xu Hui Art Museum is located in an old mansion renovated around 2005. Hosting various art exhibition, it is quite different from the previous tenant of the building… a Sichuan Restaurant. There is little in English about the history of this building and its original occupant, but I happened to find more by complete random. Here is the story of the house located on 1413 Avenue Joffre, and its uncommon owner Ye Hong Ying.

It all started in an antic market, when I encountered a stack of  bills all for the same location, 1413 Avenue Joffre. They were normal utility bills from the 1930’s including electricity bills from the “Compagnie Francaise de tramways et d’eclairage electrique de Shanghai” and “Shanghai Telephone Company”. With them also came along a significant number of subscriptions invoice to major English Newspapers published in Shanghai, starting with the most important one, the North-China Daily News.  They also included other titles such as the Shanghai Herald, the Shanghai Times and The China Weekly Review.  Finally, I also found bills from famous publishing companies such as Kelly & Walsh, The Commercial Press, The China Press, as well as “International Booksellers Limited”, a bookstore on Museum Road. Since all the bills were addressed to “Hong Ying Library”, it was clear that the location was a library in the 1930’s but I had very little information about the establishment or who Hong Ying was. 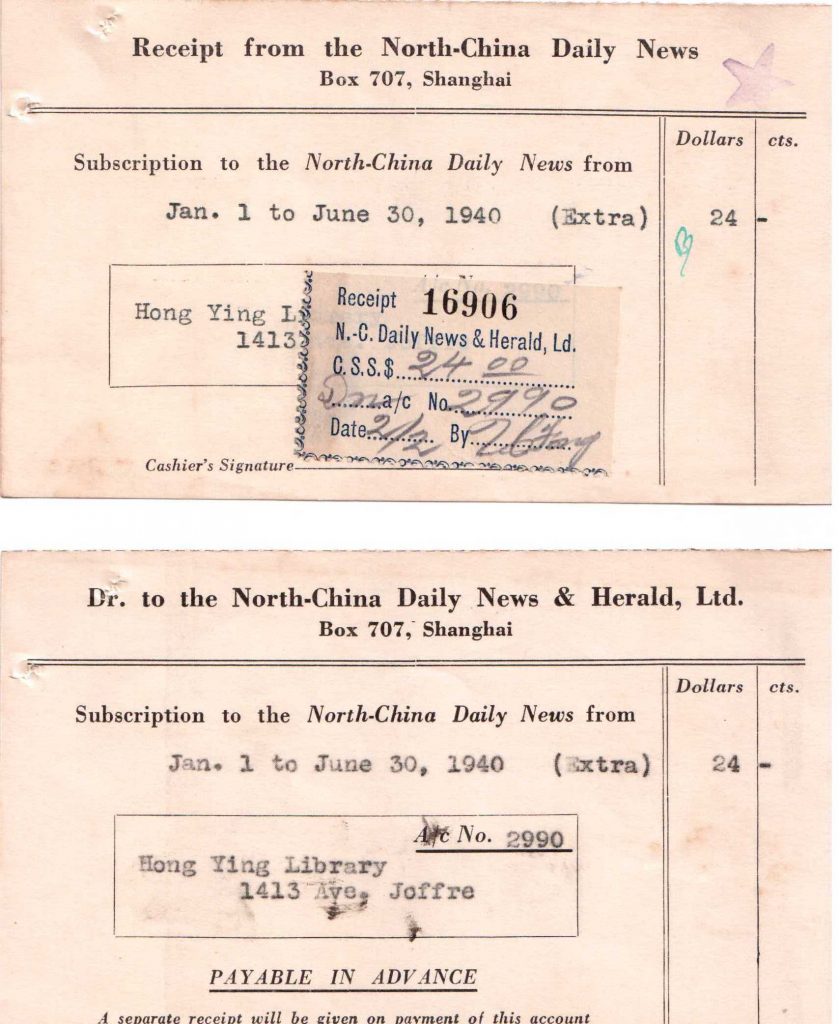 No results were found on the English internet, however the Chinese one gave the answer and details about this gentleman and his library. Born in 1860 in Xiamen, Ye Hong Ying moved to Shanghai with his family in 1867. He went to Japan to learn the trade of seafood in 1877, coming back to Shanghai in 1881. From that point on he became a major trader in sea foods, abalones and other sea delicacies, as well as exporter or various commodities. By the mid-30’s his empire included cotton mills as well as banks and insurance companies. He spoke Chinese, Japanese and probably English as well. 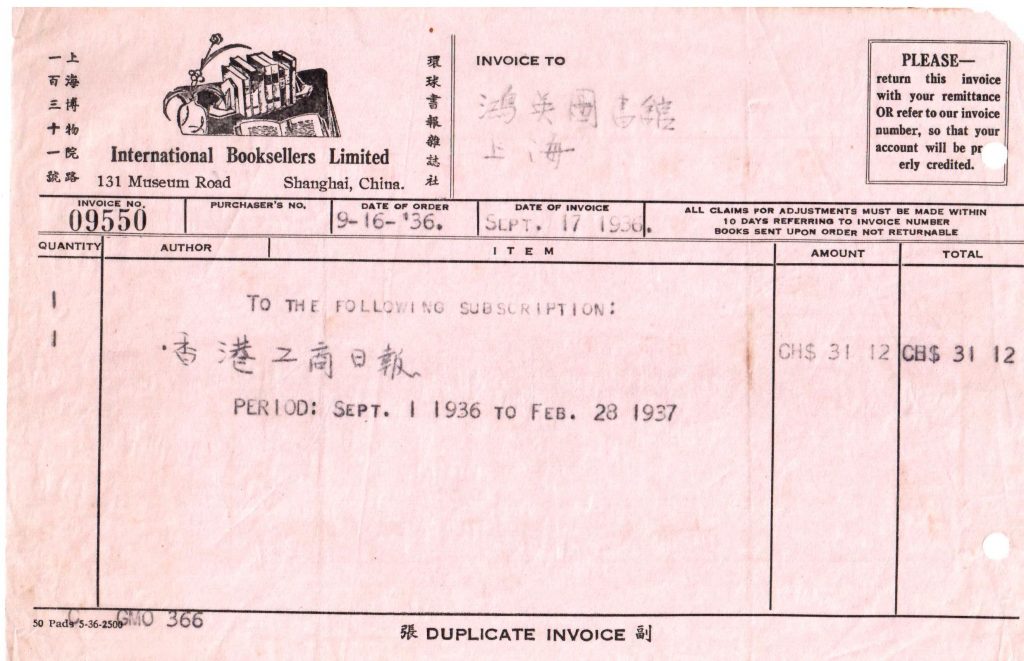 In 1933, he set aside the amount of 50 million Chinese Dollars to create a English language library. The establishment became known as the “British Library” or Hong Ying Library. It officially opened in 1942, containing more that 150.000 books, 3600 magazines and subscriptions to many dailies (including the ones mentioned above) . Unfortunately, it did not last for long as the content was transfered to the Shanghai library in the 1950’s. Along with the Xu Jia Hui library and the library of the Royal Asiatic Society, the British Library was a major source for English books in old Shanghai. Most importantly, it was open by Chinese people who were eager to expose their country to the world, bringing the knowledge right where it could be most useful. As such, it was surely a place often visited by modern English speaking Chinese and probably foreigners as well.