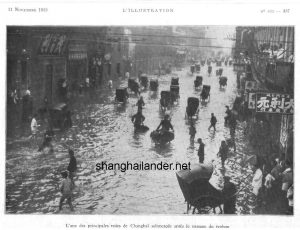 Being in the subtropical zone, Shanghai weather varies strongly over the course of the year.

Summers tends to be very hot, with the back ground noise of cicadas (see post Singing trees and Shanghai heat), the damp atmosphere feeling more like tropical Saigon. On the opposite, winters are cold and damp (See post freezing Shanghai). While snow is rare (see post snow in Shanghai), the humidity makes living in the city really miserable for a few days. Mid-season between those Scylla and Charybdis are really nice, and best to visit Shanghai either in spring, or in Autumn.

Shanghai sub tropical sun light is very strong and a few sunny hours tend the change the city mood really fast. This is why most houses face South, as light coming directly inside the home will brightens up the dampest winter day. In the rare days of winter sunshine, lanes fill up with hanging clothes and bedding, the sun light being most effective to chase away bugs and humidity of the old houses.

Best days for me are also those blue sky days in winter, even better late winter or early spring. Winter time is a particularly great time to look at old architecture in the former concessions. While plane trees leafs provide a nice shadow in the summer, they tend to cover up low rise buildings from the 1920s and 30s. Winter see the leafs disappear and the buildings appearing clearly. It’s a great time to walk around, look at the buildings and take photographs. With the spring a few days away, buds will soon open before becoming leafs. They will recreate the charming green vault overlooking the streets, but will also cover Old Shanghai low rise buildings. With a few days to enjoy it, every day of blue sky is an opportunity to discover more about Old Shanghai, so just go out and look around before it’s too late… for this year.

I have written several posts about Shanghai’s winter that makes people miserable for a few months, but I did not write much about Shanghai’s summers. Activity continues despite the heat and tourists come to visit the city (see post Tourists in summer Shanghai written three years go). The streets of old Shanghai are full of the cigala’s noise that creates a wet Mediterranean version of the city, as described in post Singing trees. Foreigner’s Shanghai become much quieter and relaxed, as many people leave the city going for a trip home, mountains or seaside far away. Modern transportation make trips to faraway countries only a few hours away, and many foreigners will take a long trip home during this time.

Trips home in old Shanghai were a different matter. They were a long and hazardous journeys either by boat, by plane or via the Trans-siberian train at the time when crossing through Russia was possible. In any case, these trips only happened every few years and people would often come home for a few months to visit relatives and business partners. To fight Shanghai heat, Shanghailanders would go on cool vacations to nearer places. Common trips included cooling stations like Moganshan where the wealthy had villas where they could stay cool in the summer. Today’s expat families often go home for the two months of summer, with the working spouse accompanying them for a few weeks. In the same fashion, expat families of Old Shanghai went to the sea side in Tsingtao (today Qingdao), Chefoo (today Yentai) or We Hai Wei (toady Wei Hai) all three of them in Shan Dong province, a hundreds of kilometres North of Shanghai and a few degrees cooler. Japan was also a holiday destination as described in “The last glorious summer” from Rena Krasno.

Air conditionning at that time was an absolute luxury that only palace hotels could afford, along with the brand new Country Hospital.  In the hot and damp Shanghai, the only way to fight the heat was to wait and move air with a fan. Electric fans were really popular altough they were quite expensive and symbol of high class living. Some can be still found on flee markets nowadays. They consummed a lot of energy and make quite a distinctive noise but they were the only option in the damp and windless Shanghai summer. To be able sleep in the heat, people would move on the street and sleep outside. With the arrival of air conditionning, people don’t do it much anymore but I remember one could see people sleeping outside in the center of Shanghai only a few years ago.

With latitude in the range of to Casablanca, Baghdad and New Orleans, Shanghai is much more associated with warm summer than cold winters. Harsh winters happened every few years. I saw a little bit of snow in January 2005, but it’s nothing compared to the snow in January 2008 (see pictures in my photo albums).

As you can see on the picture, snow in Shanghai is not a new thing. The postcard was written in December 1930, but the picture is from an earlier time. Peace hotel was not yet built when the picture was taken, so the picture is from before 1928. On this picture, Palace hotel still had it’s tower that were destroyed in August 1912 and rebuilt in 1998 (according to “The Bund” from Peter Hibbard). Railways track visible on the postcard were laid down in 1908, thus the picture is from the period between winter 1908-09 until 1911-12. I have not found yet the records of temperature for this period, but clearly one of those winter was really cold. I am not sure how frequent snow fell on Shanghai then, but it could have been quite rare since the picture was still in use 15 to 20 years later.

Cold in Shanghai at that time was surely not a problem for the rich foreigners and Chinese alike. Most western style houses were fitted with fireplaces. It must have been warm in then, much warmer than later. As I explained in another post (Freezing Shanghai), most Shanghai houses have no real heating, only air conditioners that are used to warm up some air. Fireplace heating can be found in a few bars in Shanghai and a few house have it, but most people just freeze. Snow was rare then, but the cold certainly did not spare the poors. The rickshaw pullers on the picture must have been freezing, right on the most expensive stretch on road in the city. Poorer houses must have been heating burning coal, like they still do in rural parts of China. Just like today, people were certainly wearing multiple layers of cloths to fight the wet cold.

Pictures of Shanghai under the snow are very rare. This is one of the reason I bought this one. Besides the glorious pictures of wide avenue, large villas and imposing building, this picture shows a Shanghai that is rarely seen. I recall seeing another postcard of Huang Pu park covered with snow, that would be directly opposite where this picture was taken. I have not found yet when was the winter in the early 10’s that saw so much snow… just some more research to do.

Winter has fully come to Shanghai. I escaped to the earliest cold wave in late December by flying to a sunnier destination, but holidays are now finished… and the winter has come back. Temperatures during the day are about 5C, but it’s below 0C during the night. This would be no problem in anywhere else apart from China, as people have heating… but not in Shanghai which is a real pain.

Shanghai old houses used to have fireplaces, at least in the villas. They were a great way to heat up those big houses and keep them warm just like their sisters in Europe and USA. Unfortunately Shanghai is different. Sometimes after the establishment of the People’s Republic of China, it was decided that people in South China do not need heating. I could imagine that people were supposed to be warmed up by belief in communist ideology… or that all this wood and coal was better used for the development of heavy industry. All fireplaces inside houses were filled up with concrete and pipes were broken down (like picture on the left). I also heard that the radiators were melted down to use the metal they were made of. In any case, it was probably a  fast track way to reduce energy costs.

The whole issue is about defining what South China is. The actual dividing line is a river, that runs north of Shanghai making the city and the surrounding provinces part of the South… I can tell you that it is cold here during winter. As a consequence, people use air conditionners to heat up rooms. If airconditionners are fine for a slightly chilly climate… they are clearly unsufficient for Shanghai’s. People push them to the maximum to get a mere 18-20C in rooms. The sales of electric heaters soars along with comsumption of electricity. Because of the real bad efficiency of electric heating and the lack of insulation of houses, a lot of energy is wasted… contributing to more pollution… Shanghai in winter is somewhat less of a world city.