Thanks to a recent business trip, I finally had the chance to view the ” Art Deco, the French-China Connection” exhibition in Hong Kong. Opened in early March, it will last until end of June and is worth seeing for Old Shanghai fans visiting Hong Kong.

The exhibition is the result of a very unique cooperation. It’s origin is the major Art Deco exhibition in Paris that took place in 2014 (see post “1925, when art deco dazzled the World” for more details), with a number of major pieces having been brought from Paris. Had this new exhibition been only a short version of the Paris one, it would already have been really interesting, but there much more to see.

One of the major and little known Art Deco link between France and China, is the mausoleum statue of Sun Yat Sen in Nanjing. If the purple mountain based mausoleum and the statue are extremely famous in China, few people know that the statue was created by French sculpture Paul Landowski in Boulogne near Paris, before being shipped to China. Landowski was also the creator of another World famous piece, the Christ statue overlooking Rio de Janeiro. (See post: From Boulogne to Nanjing for more details).

With a France-China Connection theme, Shanghai art deco was also called in, with the help of major Shanghai based collector including Deke Ehr, Patrick Cranley and Tina Kanagaratnam. The original Paris Art Deco exhibition had shown a few photos of Shanghai Art Deco architecture by Leonard & Vesseyre company. Here, the Shanghai part is much larger with great examples of Shanghai Art Deco furniture, as well as fashion and famous art deco advertising posters. Side by side with the ones from Paris, they highlight the similarities between style and fashion in both cities during the same period.

Many more of those advertising posters from Hong Kong were on display, but the most important contribution to the exhibition is the whole room full of 1920’s and 30’s compact boxes or “necessaires” as they are called in French. These small boxes for ladies to carry make-up became really trendy in this period, and the collection on display is simply amazing thanks to the Liang Yi Museum.

Although the neighborhood of Kowloon Tong is quite far from the center of Hong Kong, the exhibition is definitely worth the trip for anybody interesting in Art Deco and Shanghai. 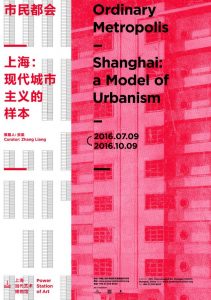 Last blog post was written about an exhibition of Paris 1930’s art in Shanghai, this blog post is about another exhibition about Art Deco that took place recently in Paris. It is actually long overdue, as the exhibition closed its doors in early March. My long stay in France, gave me the opportunity to see it in Palais de Chaillot (itself an Art Deco master piece) in Paris.

This was the last major exhibition in Paris about Art Deco since 1975, and the 50 years celebration of the “Exposition Internationale des Art Décoratifs” of 1925, from which the Art Deco expression comes. It was designed to commemorate the birth of Art Deco, as well as to show how French Art Deco expended to the World. The new style from the 1920’s, with it’s geometrical and very lean design was a revolution, breaking for the overcrowd of ornaments of the Art Nouveau style. Long before being called Art Deco, it had become the symbol of modernity, celebrating liberation from the madness of WWI. This period is called in French “Les années folles (the crazy years)”, showing the energy and creativity of the period. Being still at that time the World Center for fashion and design, Paris was the center for the creation of this new style before it took off and spread all over the world. Strangely enough, Art Deco style was not considered much valuable for a long time in France, as the country has many much older pieces available. With the years passing, it seems to be in fashion again.

The exhibition was an essential display to understand how this new style invaded all forms of art from architecture and interior design to textile, fragrance, automobile, ships design. In the boiling cultural mix of 1920’s Paris, many people got inspired from it. Ideas and fashion spread fast in the artistic community, with such famous figures as painter Tamara de Lempicka, dancer Josephine Baker, fashion designer Coco Chanel as well as Lalique (whose glass decorations were used for the Cathay Hotel, Peace Hotel today). The new style also greatly influenced the design of large cruse ships, symbol of modernity and travel way before today’s airliners (see post 2 months in rationnaire for details).

I brought back the exhibition catalog (available in French only… how French can that be), but it would be way to large to share here. Searching the internet, I found a nice video about the exhibit that will give the feeling for it. https://www.youtube.com/watch?v=DsV5cg2Y19M

The exhibition did not stop at showing Art Deco in France. Although it really does not leave much space for Art Deco in America or in the British Empire (like Art Deco wonders like Napier, New Zealand or Mumbai) the exhibition showed the development of Art Deco in the French colonies. Besides great Art Deco in North Africa and Indochina, I was nicely surprised to find a pavillion dedicated to Shanghai. It mostly focused the work of French architect firm Leonard, Vesseyre and Kruz (more about them soon) forgetting others like Hudec but it was really nice to find a small piece of our city in the exhibition.

Visiting Boulogne’s 1930’s museum 2 years ago was fascinating. Coming from Shanghai Art Deco, the origins of the art movement became so clear by comparing both cities art from the same period. The most amazing discovery was surely to find out that Sun Yat Sen’s mausoleum satute in Nanjing was created by French sculptor Paul Landowski, who also crafted world famous statue of Christ in Rio. (Click here to read the full story, with post “From Boulogne to Nanjing”)

Little did I imagine that the same exhibition would actually come to Shanghai only a year and half later. Thanks to long term Shanghailander Philippe Cinquini, part of the collection was brought to Shanghai including studies for the statue of the father of modern China. The exhibition is displayed in the Shanghai Art Museum (former China pavillon at Shanghai Expo 2010) and has been extended til end of May . For details, follow the link to Shanghai Art Museum exhibition page . (reservation in advance compulsory).