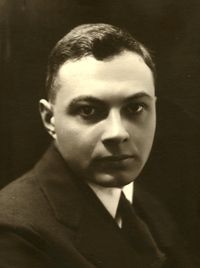 Lászlo / Ladislav Hudec was one of the main architect of the old Shanghai. He designed major buildings of the city, such as the Normandie Building on Avenue Joffre (toady Huai Hai Xi lu). He also introduced a new style to the city after his trip to America creating the most modern buildings at the time such as Park Hotel on the race course (see post Advertising Park Hotel for more details) and the “Green” House of Dr Woo on Avenue Road (today Beijing Xi Lu). His legacy can be clearly seen around the International Settlement of the old Shanghai. I got particularly interested in Hudec since he came from a city that is now Slovakia, but was Hungary when he lived there. This resonates with my own story as I spent several years in Hungary myself, before coming to Shanghai (see post in love again and Budapest Old and New” for more details).

One of my Australian architect friend was recently putting together a presentation about Hudec work. She knew very little about the history Central Europe. I had to tell the story of the Austro-hungarian empire and how the treaty of Trianon (1920) dismantled it, creating tensions that are still so vivid today. I even took my map of Hungary before and after Trianon treaty that I bought a few years ago in Budapest as a souvenir. Anybody who has spent sometime in Hungary will know exactly what I am talking about.

50 years after his death, Hudec is finding himself in the center nationalistic competitions that started after he left the, then, Austra-Hungarian empire. He never returned to it after the split into several countries including Hungary and Slovakia. Hudec was born in a city that was Hungary then, but is now located in Slovakia, know as Banska Bistrica today. He studied in Budapest Royal Academy of Science (see post Laszlo Hudec Alma Mater for more details), and wrote his notes in Hungarian, one of the most difficult language in the World. Hungary was ruling this part of the world at that time so his education was certainly in Hungarian, thus he is seen as Hungarian by Hungarians. At the same time, he is referred on some of his buildings in Shanghai as Laudislav Hudec, a architect from Czechoslovakia. While making Slovaks pleased, this surely infuriates any Hungarian knowing about it. In any case, his genius knows no border.

Having heard the story from both sides so many time, when I lived in Central Europe, I find it really strange to be caught back this typical Central European story such a long way from its origins, now that I live in Shanghai. Both countries are now part of the EU and entered the Schenghen space but this competition is still going on. Seen from China, they are tiny nations (Hungary and Slovakia’s population combined is smaller that Shanghai). Hudec was taken prisoner on the Russian front in 1917 and escaped a train to a prisoner camp in Siberia to finally arrive in Shanghai. Not able to return to Hungary after 1945, he moved to the USA when Old Shanghai closed its doors to foreigners. Though is never went back, he still finds himself caught back by the Hungary/Slovakia competition even after his death.

This will not stop the celebration of the “Year of Hudec” that is taking place all over this year, celebrating his work that is so much part of Shanghai (more details on www.hudec.sh).

* Update from 2017: Nearly 10 years after the original post, it is now clear that László Hudec is seen as a Hungarian architect in Shanghai. Thanks to “The year of Hudec” in 2008, as well as numerous books and article, László Hudec is now fully recognized in Shanghai. At the same time, he is also gaining fame in Hungary, that he left in his youth, never to come back.

4 thoughts on “Looking for Hudec”