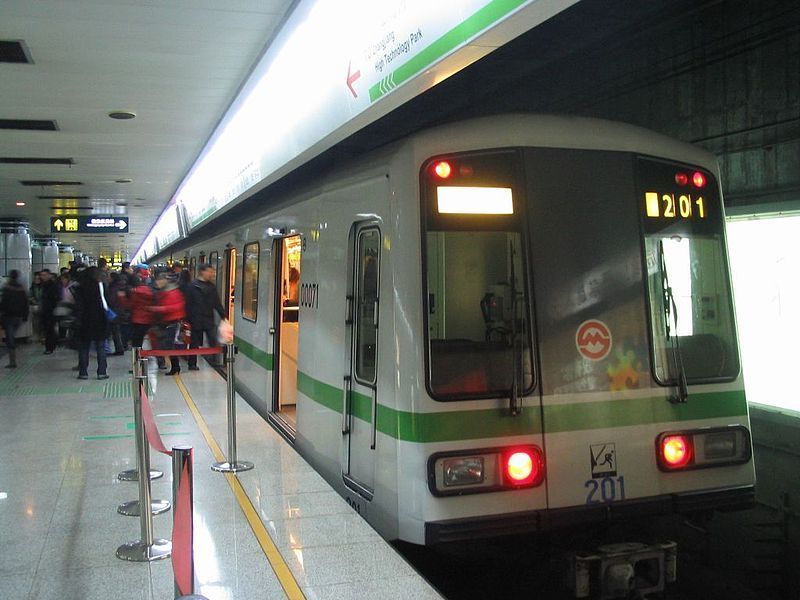 Shanghai underground train is one of the feature of the city. As opposed to Beijing which metro was started in the 50’s with Soviet help, Shanghai Metro was only started in the 90’s. New lines are being built at fast speed, opening the one after the other. The first time I was in Shanghai in 1998, line 1 was just starting with only a few stations. Line 1 has been expended, line 2, 3, 4 and 5 have been put into actions. The Shanghai Metro authority just opened the extension of line 2 towards Hong Qiao.

The only real node was People Square station for a long time. Peak hours in the corridor going from Line 1 to Line 2 is just like going through a sea of black hair. Riding the metro then always involves a lot of pushing around in the very dense crowd. The trains and stations get packed and everybody is jut trying to keep a little space for him/herself, and trying not to fall on other people. No politeness or manners in here and people nearly climb on each other sometimes. It feels a little like Paris metro on strikes days, when the number of trains is drastically reduced. The most funny or annoying is that people climbing in the train often don’t let people go out first. This always creates a mess, and one has to sometimes push people out to be able to escape. I have to admit that education campaigns seem to have an effect as now people step out more often if they are blocking the way, as well as (sometimes) give up their sit for elderlies or women with kids.

Until last year, the Shanghai Metro was relatively simple. The older stations were not really fancy, but pretty effective in carrying tens of thousand people a day. Since then, Shanghai metro has embark on a campaign for modern and fancy look by adding glass sliding doors on the platforms. I am not so sure what is the reason for it. Local people say that people have regularly jumped on the tracks, needing a brand new wall to stop that. As incidents and delays do not seem that frequent I am just convinced that Shanghai metro wants to look like a “world city metro”.

Like in HongKong and Singapore, they need sliding glass doors. This is where the Shanghai twist comes in. Work was started in some of the stations, without any announcement. There was very little protections for the passengers on the platform. Even better, the glass partitions were installed, but the doors were not operational. This made passengers feel very safe behind the glass protection… until realizing that there was no door. This generally happened when the next train was arriving. This whole mess made it look pretty disorganized and even dangerous for unaware passengers. Not all the doors are functioning yet, but after a few months of being interrupted while unfinished, work has restarted. Major stations on line 1 have been equipped and completion now seems near. I am sure the people selling glass doors and separations must have had great connections with the metro authorities. They must now be celebrating. With glass doors and separations in its metro, Shanghai is trying to become a little more of a world city.