Writing the last post about Paul bakery attracted my attention to bakeries in the old Shanghai. There was a lot of foreigners but not that many French (probably about 1200 in the French concession at most). Still, from the documents I read and knowledge about European culture, there must have been bakeries in Shanghai to satisfy foreign (and Chinese appetites). The best place to look was surely my 1938 version of the Shanghai Dollar diary (more about it in an upcoming post). 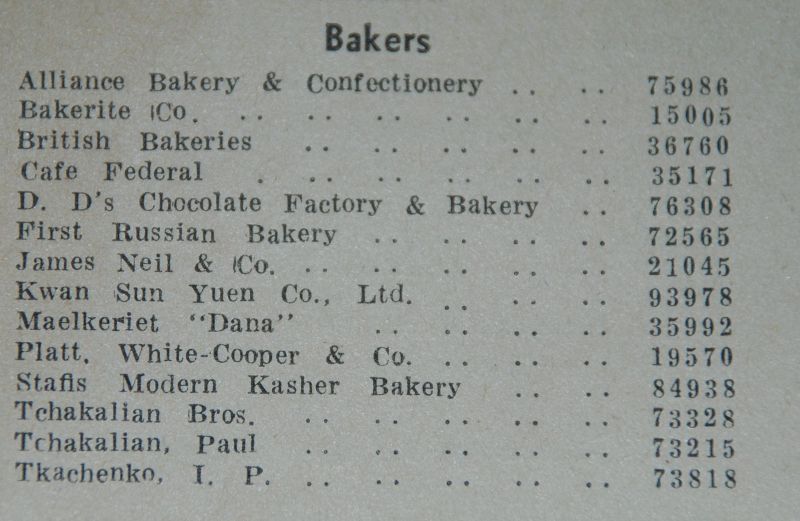 I looked into the “bakery” entry of this older version of the phone book and found out 15 entries. I remember reading that the bakery business in the 30’s was run by many Russians in Shanghai. By looking at the names of the shop, at least 5 of them were run by Russians. The most obvious was First Russian bakery, Tchakalian (more about in a further post) and Tkachenko.
First Russian bakery is pictured right (picture is from the website of the Shanghai municipal archives). Located on 234-236 Avenue du Roi Albert (This now Shanxi Nan Lu, the location was approximately opposite Parkson on the other side of Shanxi Nan Lu). This was the urban art of the French Concession where many small apartment buildings were built, not far from Cathay Apartments, Brooklyn Court and the Cercle Sportif Francais. I will have to check, but if the building still exist, it’s probably a cloths shop nowadays.

Tkachenko bakery was also pictured on the same website.

As you can see, they were located in a large mansion of early Shanghai style. This is surely a much earlier building than the one of First Russian Bakery, but it was located only about 15 minutes walk away from it. 640-642 Avenue Joffre is today HuaiZhong lu, north side about half way between Yan Dang Lu and Sinan Lu. It’s approximately opposite the current Sephora shop. The original building was torn down since, probably in the 1990’s. This Avenue Joffre location was a bakery but also a Cafe and Restaurant (as seen on the picture). it would have been the ideal place to stop after shopping on Avenue Joffre (just like Paul today). It was typical of this part of the French Concession that attracted a lot of the White Russians and took the nickname of little Russia. Tkachenko also had factory and confectionery on Nearby Route des Soeurs (today RuiJin Er Lu), just after the corner with Nanchang lu.
This setup of having a shop on a prime location with a factory and confectionery in different location is very similar to today’s Visage chocolate shop and bakery (with its shop in XianTianDi and bakery and confectionery at the cross of HongQiao Lu and HuaiHai lu). The nearest thing to today’s Paul was probably the Tchakalian bakery, but this will the topic on another post.