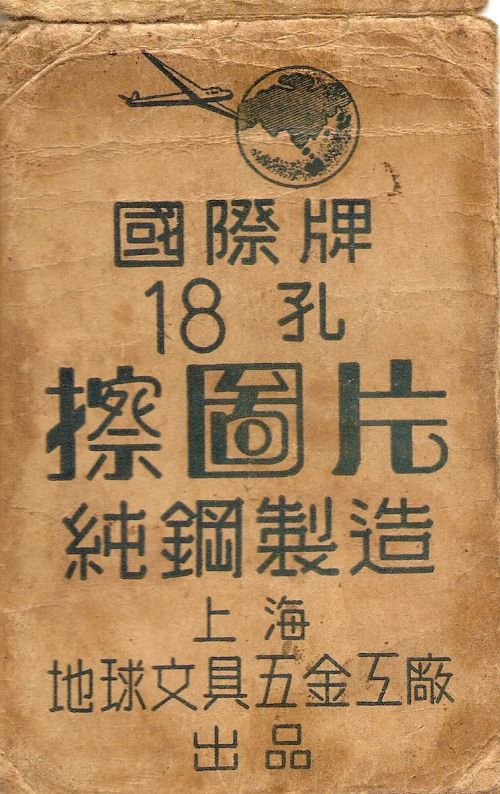 Going to antic markets is always like a treasure hunt. Finding things is a matter of luck, but also of knowledge. The best example is surely this little envelop that I found last week. I had seen it before but never really noticed it. It’s a pretty banal object, a envelop for a drawing tool that came with it. It has become grey with time and usage but the prints are still clearly visible. The ruler in it is still stainless and nearly as new (see picture below).
Having seen it so many times, what attracted my attention on that occasion is the similarities with pictures in a book I am currently reading about art in the 1920’s and 30’s in old Shanghai, and in particular print art (I will make an introduction to this book in a later post). Reading about the evolution of the fonts used for printing the characters, I could recognize that this one is pretty unusual. The characters used in this very simple object are very carefully designed, in a similar way to the sophisticated youth and art magazines of the time. In particular, the fonts used for the middle characters are really special with very wide vertical strokes against very thin horizontal strokes. The geometrical shape of the characters shows the clear influence of the modern painting and design. There is something “art deco” about it.

This is typical of the the Shanghai style, or Haipai. At written on the envelop, the ruler was made by a Shanghai company. It is a simple drawing tool, an industrial mass consumption product but the envelop design really gave it a very modern look for the time. Along with the “International Brand” ( with the logo with plane and earth), the design gave the impression to the buyer that he was getting a piece of this bright new world on display in magazines and posters. Haipai styling was not limited to newspapers, books and other intellectual objects but also also applied to more usual objects, making them truly Shanghainese. This simple object is a true reflection of Shanghai at that time, a true Shanghai product.

2 thoughts on “The Haipai ruler”