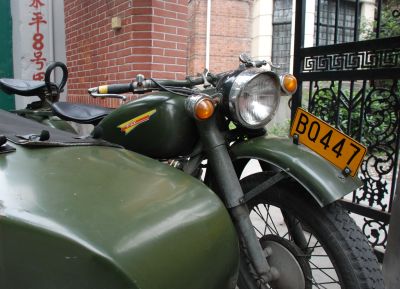 Old side cars driven by foreigners are a common sight in Shanghai streets on weekend.  In good weather, they are a cool way to cruise the tree lined streets of the old French Concession.  Looking like 1930’s motorbike, they fit perfectly in the art deco surroundings.

The side cars are from the right period, but they were not available in 1930’s Shanghai. Made for the German army in the 1930’s the original model was only available in Europe. It was a fixture of the German army during World War II and is seen in many movies about this period. It’s only after the war that the Soviet army transported the plant over to USSR, renaming it Ural. Sometimes in the 1950’s, USSR helped creating a copy of the factory near Beijing, to equip the Chinese army. Many years later, the bike caught the eye of a few expats first in Beijing, then in Shanghai. The mechanics has been little changed from the 1930’s original, so these side cars are a piece of the European 1930’s in 1930’s Shanghai. By a twist of history, the bike and the city are a great match, and it’s easy to imagine people cruising old Shanghai one similar bikes… but it probably never happened until a few years ago.

Driving sidecars is not such an easy task. I know a few people driving them to work everyday, but they are not many. Most owners drive them only on weekends… and most Shanghai residents would love to enjoy the fresh air but probably not dare to drive around on ths bike. This is where a new service comes in handy. Shanghai Sideways (www.shanghaisideways.com) is the fruit of a friend and myself. The company offers tours of Shanghai, both the new Shanghai and the old city for tourists and residents. My friend Thomas is crazy about sidecars and drive people around. I have been involved in the tour design, commenting for the historic tours and marketing. For more information on the tours, visit the above website, or contact me at: hmartin@shanghailander.net

Update: I left Shanghai Sideways in 2011, but the company is still going strong. It has changed name and his now called Insiders, now expanding is Morocco.

3 thoughts on “Visit Shanghai in a vintage sidecar”