Just like in previous post “Home sweet home“, I used my trip in France to look at French buildings from an old Shanghai point of view. The heart of Paris was mostly built in the mid XIXth century, thanks to the design work of Baron Haussman who redesigned the French capital. Paris new design with large avenues connecting train stations organized in a network gave inspiration to design of cities all over Europe (just like Budapest where I used to live and many others). It also inspired the design of American cities like Chicago in the early XXth century as well as Moscow with its huge avenues … and finally came back to Shanghai as a model for building today’s Pudong. 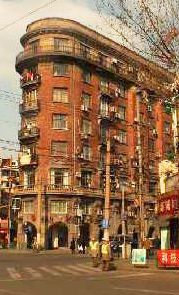 Built on a ad hoc basis and constantly changing in a bit of architectural anarchy, old Shanghai was never planned in such a way. Although it was called the Paris of the orient, the similarities of town planning only goes so far as Avenue Joffre (today Huai Hai lu), that is indeed far from its model. However, Paris continued to be built in the 1920’s and 30’s at the same time as old Shanghai, here are a few examples of similarities. The first one to catch my attention was the building left that is located near St Sulpice in Paris Rive Gauche area.

Although it is not a triangle building like the Normandy building in Shanghai (picture right), they have a lot of similarities with the usage of red brick over 2 floors of stones as buildin g materials. The fist floors are both using large arches and a balcony it circling the top floor.

The second one is this art deco building in Montmartre. It did not specifically remind me of Shanghai art deco, apart from one important detail at the bottom right of the picture… the entrance door. Its shape is peculiar as it is non rectangular shape, but with cut angles instead. This shape is special enough to be remembered and I have seen it before in Shanghai, in Willow Court on Route de Boissezon (today Fuxing Xi Lu). Small detail, but clear similarity miles away from each other.

One thought on “Paris Art Deco”