Belgium cities are mostly famous for their Art Nouveau architecture, built before WWI. While visiting Belgium I was on the hunt for Art Deco buildings, expecting very little apart from enjoying Art Nouveau. This was true in Brussels where Art Deco buildings are very few, but Antwerpen offered a nice surprise. The main Art Deco feature of the city is the 1932 Boerentoren (today known as KBC tower). First Art Deco tower in Europe, it was also the tallest when it was built and was renovated in the 1970’s after being considered for demolition.

The Boerentoren is an Art Deco wonder with the sculptures ornamenting the façade, in particular the cover for the main entrance. The building originally hosted offices and apartments, as well as a restaurant and a beer bar (this is Belgium after all) at the 10th floor, on the top of both wings (as seen on the 1930’s picture). It’s shape is quite similar to Shanghai’s Grosvenor house.

Another Art Deco wonder is located on the riverside. The décor of the building and the location makes it clearly linked to the shipping industry. I guess it was the headquarters of a shipping line or a marine insurance. Since many many buildings on the waterfront were destroyed during WWII, it is quite miraculous that this one has survived. I particularly liked the door in the picture.

The last area with Art Deco was around the central station. Although the station and the zoo next to it are Art Nouveau treasures, several buildings on the boulevard away from the station are of Art Deco design. The most spectacular is probably the Century building (picture left), now a hotel. The main features are the geometrical sculpture on the top of each column, the iron balconies and the staircase shape of the building itself. 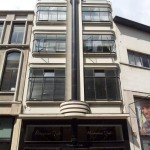 We continued walking in the city with a short visit in the shop of a famous retailer, established in nice Art Deco piece, just like one of the Shanghai branch on Nanjing Xi Lu. In Antwerp, not only the outside is Art Deco, but the inside of the shop as also been kept in its original state. I wish it was the case also for Shanghai Art Deco buildings turned into shops.

One thought on “Antwerp Art Deco”