“The Blue Lotus”, Tintin’s adventures in China, was probably the first thing I learned about Shanghai. The reality of today’s city has little to do with this cartoon anymore, but the book was an inspiration to come to Shanghai for many of us. Although it was a work of fiction, this great depiction of the city’s past still has find echoes in shikumens or villas in the former French Concession.

The weekly black & white cartoons were originally published in children weekly supplement of Brussels’ daily news paper “twentith century” (‘Le Vingtième siècle”). Famous cartoonist Hergé set to send his report to China for his fifth adventure. Rarely leaving Brussels, he started deep researches on this country that he knew little about. His meeting with a young Chinese art student in Brussels created the elements for his new work.

Born in Shanghai, Tchang Tchong-jen (Zhang Chong Ren in modern pinyin) studied painting in Tu Shan Wan art academy, that was founded by Jesuits priest in Xu Jia Hui. He was the nephew of Ma Xiang Bo (known in the west at Father Joseph Ma), a professor at Aurora University (run by the Jesuits brothers), who left it to start Fudan University. Just like many young Chinese, Tchang is highly interested in politics and wishes the end of the foreign concessions in China. He leaves China to Belgium on 23 rd September 1927, the day of the “Mukhden incident”, first step of the Japanese invasion of Manchuria and meets Hergé during the early part of his stay. 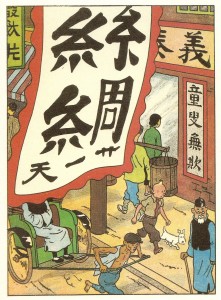 Tchang’s role in creating the cartoons really develops when Tintin reaches Shanghai. Being himself an artist, he strongly influences the drawing of the cartoon, making it so vivid that Hergé’s drawing sometimes looks like old photos of Shanghai.

Chinese characters used in the action and decors must have been drawn by him, including a number of secret messages, like political slogan demanding foreigners to leave China disguised as writing on walls. Some foreigners in the cartoon are seen as racists, exploiting poor Chinese people. Real pieces of news such as the “Mukhden Incident” are included in the story. Tchang is himself represented in the album as Tintin’s friend Tchang, demonstrating the link created between the two artists. Although this a biased view of a much more complex reality, the album carries the atmosphere of Shanghai at this period really well.

Having being instrumental in the cartoon creation, Tchang goes back to China in 1935, before the actual publication of the cartoon in “Le Petit Vingtième” newspaper. Having lost track because of the war and political events, Hergé will look for his friend for years, before finally meeting again in1981. The Blue Lotus remains one of the most wellknown Tintin album, having been published in several editions in France / Belgium and in China. Publication will be studied in a further post.