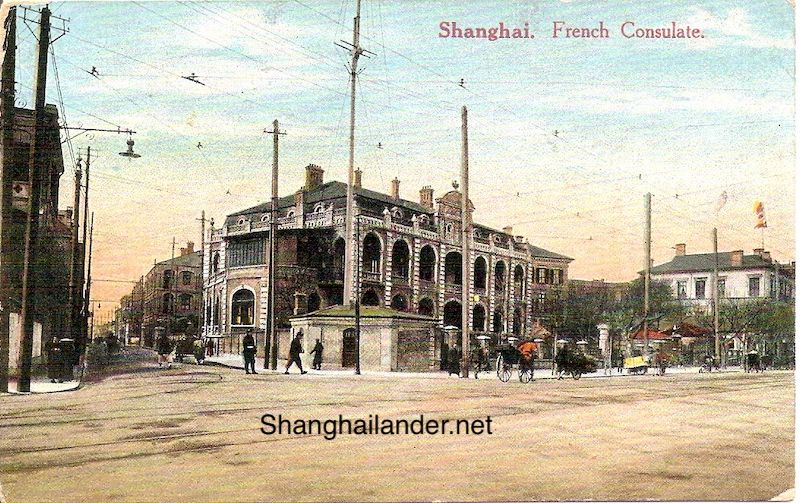 “La Concession Française de Changhaï”, the Shanghai French Concession was officially created by the Whampoa treaty in 1844. It became much real at the arrival of the first French Consul Général, Charles de Montigny in 1847. One of the main task of the Consul was to open a Consulate General, and later to build an actual building to host the Consulate.

As seen on above map, the original French Consulate building was not on the Bund, a little behind, within the plot of the Catholic missions. This plot is where the current Saint-Joseph Church is, on Sichuan Nan Lu. The Consulate moved a few years later to a location on the “Quai de France”, the French Bund.

The new consulate building of classic style, was probably built in the mid 1860s as the French Concession was extended on the river side in 1861. From that point, Quai de France, or French Bund, became much longer and with more traffic. The street on the left side of the Consulate became “Rue du Consulat” (today Jingling Dong Lu). Although I could not find the actual date of construction of this building, it did not last very long as a new Consulate was built on the same plot but closer to the river and the French Bund, opening in 1896, when Paul Claudel was the French Consul in Shanghai.

The new building was of neo-classical style, matching buildings on the Bund, a few hundred meters away. It was asymmetrical with a round extension on the side on Rue du Consulat. Actual French people were only a few hundreds in the French concession at that time.

The building was the office of the French Consul as well as his family home. If the area was not so busy when this consulate building opened, it was very different in the 1930s as Jacqueline Meyrier, daughter of Consul General Gustave Meyrier ,who was born in Shanghai in 1927 and lived in Shanghai from 1932 to 1936 and from 1945 to 1950. As stated in her interview by Didier Pujol, “She remembers the noise coming from the Quai de France which was always filled with coolies carrying loads off the boats.” The Rue du Consulat was the main road in the East of the French Concession, and was next to Route Colbert were the godown (warehouse) of Butterfield and Swire was located, so the area must have indeed been noisy.

This version of the French Consulate lasted the longest, and the building continued to be used long after the Consulate closed in 1950. A French friend told me the story of the destruction of the building in 1982, when he tried to keep a few pieces of the original building. Unfortunately, those remaining pieces have been lost over the years. The former French Consulate building was replaced by an unimaginative office building.

Fortunately, this building was renovated and a neo-art deco style top was added in 2006, occupied by ICBC bank. The ground level of the building reminds of the style of the former Consulate building, including the metal fence around the plot. Maybe it is an hommage to the former building in the same spot. The neighbouring building, the former office of the Messageries Maritimes still stands, being now the seat of the Shanghai archives.

I also wrote an article about the former British Consulate a while ago, follow the link to read it.