Books about old Shanghai are today numerous and one only needs to buy them to get information. In was not the case at my arrival in the city, in 2004.  Old Shanghai was not far from being a taboo topic for most people Chinese and foreigners alike. In the age prior to social media (remember Facebook was found in 2004), information was difficult to find beyond the extensive but not so user friendly Tales of Old China. Some of the Tess Johnston‘s and Deke Erh’s books already existed, but they could only be found in a few places.

A lot has changed on that topic since and many books have been published on the topic in Shanghai and abroad. I mostly write about foreign languages books, but numerous books in Chinese have also been published. Old Shanghai has become fashionable, and the Shanghai municipality is really doing an effort for preservation. Quite a bit has been lost in the meantime, but Shanghai still has enough of its past to have seen the World Art Deco Congress come to it in 2015.

The most popular series of books about Shanghai is probably the Shanghai Walk series, started by Tess Johnston in 2007. Practical and insightful, the original “Six Shanghai Walks” was a real novelty, combining in-depth research and often unheard information in the format of walks lasting about 2 hours. This is the perfect format enjoy walking the streets of Shanghai, alone or in a small group. The book became so popular that 4 more followed over the years, taking visitors beyond the concessions to further parts of the city.

Last Thursday saw the launch of the latest walk guide book, “Final five Shanghai Walks”, an event organised by Historic Shanghai. This last book contains walks centered around famous and infamous people living in Old Shanghai concessions. They including American journalist and publisher JB Powell, Chairman of the Shanghai Municipal Council Tirling Fessenden, Chinese architect Robert Fan, movie start Ron LingYu and many more. This walk guide is the latest and probably the last of the series as Tess Johnston will be retiring to the USA later this year. Another reason to grab it and enjoy the walks, now that good weather is coming back. 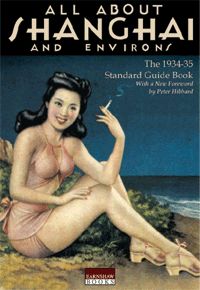 I had read parts of this book over the internet before, as it is available on the Tales of old China website, but having it on paper is a much nicer experience. Recently republished by EarnShaw books, “All about Shanghai and its environs” is a time travel. A reprint of an actual 1934 guide book about Shanghai, it catches the city at its highest point, just before the 1937 Japanese invasion that altered the course of history. While Europe and the US were struggling in the great depression, the guidebook shows a city full of energy and hopes, the most important city in Asia at the time.
Well known old Shanghai expert Peter Hibbard brings his contribution in a great introduction to the original guide. What is striking is how much tourist expectations and reactions over the city remain unchanged after so much political turmoil and redevelopment. Exactly like today, Shanghai was the entry point of many tourists visiting China. Landing on the Bund, they would come looking for the “eternal China” with pagodas, blue porcelain and incense like they always dreamed it. The first mostly found disappointment with Shanghai being a modern western city. They would then try to get a glimpse of their China dream visiting temples and garden (like Yu Yuan garden, Jing An Temple, Jade Buddha Temple or Long Hua Pagoda) before finally seeking refuge in the familiar environment on hotels and bars in the city center.
Just like today, night life was one of the high point of Shanghai with places of all levels catering for every taste. Nightly China encounter was one of the major attraction of Shanghai, from the English Club (#2 on the Bund), the bar of the Cathay hotel (today Peace Hotel) or the French Club (Today’s Garden hotel) to cabarets and male-only establishment on Blood Alley or the back streets of Broadway’s Hong Kou district,
Today’s Shanghai is a shopper’s paradise, just as was old Shanghai. Shopping streets offered a mix of shops bringing foreign goods to China (just like current department stores or City Shop nowadays). Nanking Road (Nanjing Dong Lu) was famous for its department stores as it is today for many Chinese shoppers, Avenue Joffre (Huai Hai Zhong Lu) was famous for its many French and Russian dressmakers as well as cafes, restaurants and bakeries (just like today). Ward Road (current Shi Men Yi lu) was famous for lady’s underwear shops. Some of today’s famous brands such as retailers Wing On and Lane Crawford already had outlets in the city. Bayer chemicals and pharmaceuticals, GE electric products, OTIS lifts and French Champagne already were famous brands in the old Shanghai.
Just like today, tourists and foreign residents were looking for “typical” China products. Tea, silk and jade were offered in many places… with a big warning for jade as its many shapes and colors require an expert eye in order to pay the right price. Hotels had many curios and antics shops… often selling brand new antics to gullible tourists of the time (just like today). This 1934 guidebook is full of warnings about the buying so-called antics that are just brand new. A short visit to today’s Yu Yuan garden shows that not much as changed on this front either.
I usually don’t spend most times reading guidebooks, but reading every details of this one was a great to a trip to Old Shanghai. With the amount of information involved, it is probably not for the old Shanghai beginner. However, with a bit of back ground knowledge it is an extremely enjoyable read about Old Shanghai. After “The Unaltered diary of a Shanghai baby”, the republication of “All about Shanghai” is a great achievement from EarnShaw books.