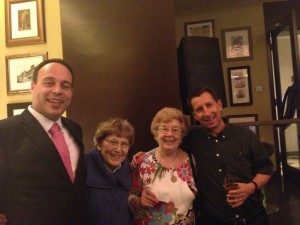 My first encounter with Liliane Willens, author of “Stateless in Shanghai” about 4 years ago was really the product of chance (see post “A date with Liliane“). As she came to Shanghai again, fate was again acting, making me encountering another former Shanghailander by total random and making them meet each other. Last Thursday was the day for the first presentation from my friend Didier Pujol (founder of China World Explorer). He was scheduled to speak about “Swinging Shanghai”, entertainment in Old Shanghai. I was also going there to meet Liliane Willens, who had just returned to Shanghai for a visit. This is when my phone rang, with a real surprise. A friend of mine had read my previous blog about the police building and Huai Hai lu and had met à lady in front of this very building. This lady was claiming to be a former Shanghailander, who used to live around this place on Huai Hai lu. After talking with her on the phone for a few minutes, I decided to take her with me to Liliane’s conference on the same evening. This is how I met with Elena Nemtzeff and introduced her to another Shanghailander.

Elena’s parents were White Russians, who fled the Russian revolution first through Harbin and then arriving in Shanghai. “My mother was not very educated”, she said, “but my father was an army cadet, from the Russian military elite school.” They met and married in Shanghai, and Elena was born in 1935. Elena’s father, using his military background, was employed as a body guard for wealthy Chinese. He then created his own firm, a pest control company , serving all the large buildings that were built in Shanghai in that period. “He worked in all the large new buildings like the Cathay Hotel and Broadway Mansions. We became quite well off, until loosing everything during and after the war.” Elena went to school to the French école de la rue Rémy (still a school today on Yong Kang lu), that was opened by the French authorities for the children of the many Russians refugees who lived in the French Concession. Most of her French has disappeared after living many years in Sydney.

During her first visit back to Shanghai, she went back to her former appartment building on 1352 Avenue Joffre (today Huai Hai zhong lu), which still stands today. She managed to catch up with her former Chinese neighbor, school mate and friend who still lived in the same place. “Because his dad was working for the French police, we went to the same school. We used to  go to school together.”

Talking with Liliane Willens, we realized that they were living about 100 meters from each other, as Liliane was living in the Savoye appart on Route Sayzoong (today Changshu Lu). Liliane was going to a different school, the College Municipal Français, so they never actually met. Liliane left Shanghai to go to the USA and Elena went to Australia.

What these two ladies have in common is a strong link to Shanghai. They remained attached to the city, despite time and distance, and they felt enough link to come back again several time when China opened again. They are and feel like Shanghailanders until today.