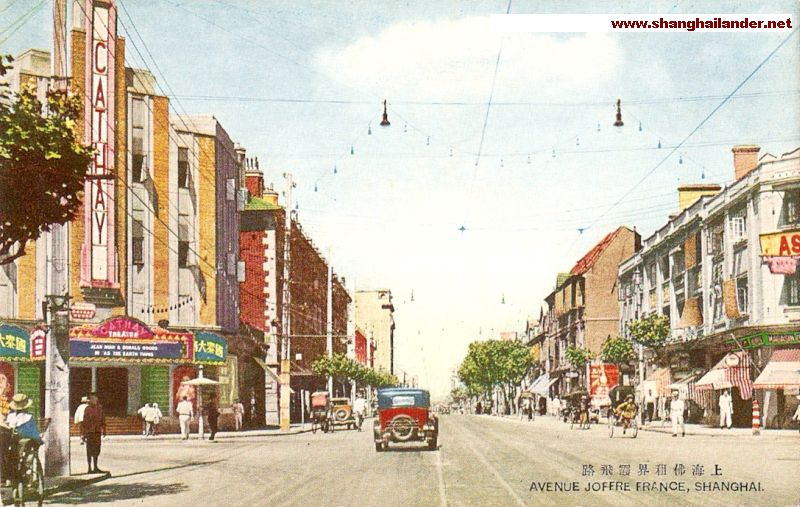 Avenue Joffre (today Huai Hai lu) was the focal point of the Shanghai French Concession. Marechal Joffre was a hero of French World War I and many cities in France have a street named after him. The street got its current name from the battle of Huai Hai (1948), that was the decisive point toward the communist victory, the take of Shanghai and the establishment of the people’s republic of China in 1949.

The French municipality was located on Avenue Joffre (currently the Central Plaza shopping mall, at the corner of HuaiHai lu and Madang Lu, that is interestingly hosts a Delifrance shop). Although many of the old buildings have gone, the section from Maoming lu to the North South Elevated motorways still looks like the old time.  In the 1930’s, many dress makers, hat shops and tailors were located on that stretch of the street, making it the main fashion shopping center for elegant wealthy citizens of the French concession. Shops were mostly operated by Russians as well as cafe’s, restaurant and bakeries giving to this area the nickname of little Russia. In the same area is located Brooklyn Court and the Cathay Apartments. Most of the old buildings of Huaihai lu have been destroyed to leave space to bright and new skyscrapers, but the above stretch has been more or less left like before. Facades have been renewed, and new additions fit relatively well in the background. Anchor buildings such as the Cathay theater (still a cinema today) and the opposite shop (today selling lingerie) can still be recognized on the pictures down though trees has grown a little since then. The return of high street clothing brands as well as coffee houses just adds to the atmosphere. Like everywhere in Shanghai, cars now drive on the right-hand side, as opposed to the left-hand side in old Shanghai. 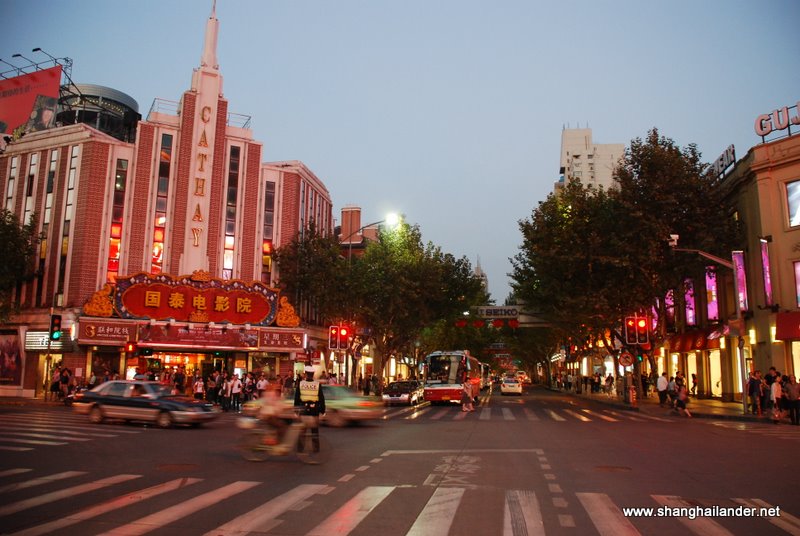 The really unfortunate bit of Huai Hai lu are the horrible metal archs and lights crossing over the street. As they are hidden by the trees during the day it is somewhat easy to disregard them. At night, they just kill the atmosphere. I have seen similar kind of lighting in other Chinese cities, so they must be part of a fashion here. On the background of  trees and old buildings of Avenue Joffre, they are just out of place and I have hoped for their removal every time I have passed by them. This is when a recent radio announcement attracted my attention. Apparently, the horrible lights will be removed in the near future. I will only believe it when I see the horrible lights gone, but this already makes my day.