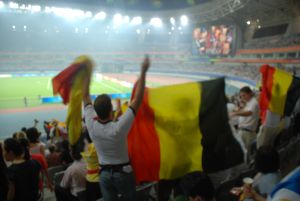 The 2008 Olympic games mainly take place in Beijing, but a small bit is happening is other cities. Of course, all finals and prestigious events will be in Beijing, but other cities got some leftovers. Shanghai was generously granted the right to host a few qualifier football game. It was very difficult to get tickets for Olympic events, and only few people I know actually flew to Beijing to attend. Since we got tickets for a game taking place in Shanghai, two metro stops away from home, we decided to give it a go.
The football game was Belgium – New Zealand, and the Belgium Consulate in Shanghai organized a gathering of Belgian people to support their team. Since the French team was not qualified for the tournament, I became a temporary supporter of the team of our friendly neighbors. The game was fun to watch in this crowd of Belgian expatriates who seem to get back some unity far away from the homeland. The French speaking people were shouting “Allez la Belgique”, the Flemish speaking shouting “Belgie” and the consensus ended up with “Belgium, Belgium” the country name in English (different from the one in French or in Flemish, being sort of a neutral ground). I even heard a few (Bilishe Jia You” Go Belgium” in Chinese). It was a nice evening followed by a few beers in local bar. Taking part (even a small one) in a world event like the Olympic was fun. Final score: Belgium 1, New Zealand 0.