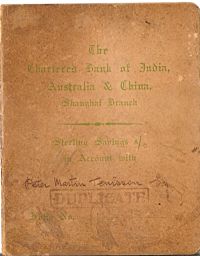 The Bund was the center of business in Old Shanghai. Major banks and companies had their headquarters on the riverside or in the streets behind. A number of these buildings are finally being renovated in turned once again into greatness, though mostly into fancy bars and restaurants. One of the most popular one is Bund 18, open in late 2004, the old building of the “Chartered Bank of India, Australia and China”. Renovation of this old lady was run by Italian experts in old building renovation. Thanks to their work, this dilapidated piece of art has been turned into a luxury shopping mall and an entertainment complex. Bar Rouge on the 7th Floor opened in late 2004 along with restaurant Sens & Bund. Bar Rouge was the undisputed star of Shanghai nightlife (see my post “Decadence on the Bund“) and has been joined by Lounge 18 (4th floor) in late 2007.

Bar Rouge is all about modern design, using very little of the original building’s features, apart from the incredible terrace with the fantastic view on the Pudong. Lounge 18’s decor really uses the building much more, as the 4th Floor was originally dedicated to be an art gallery. The careful restoration of the windows, ceiling and interior adds a lot to the atmosphere, giving real feeling of history in the building. The most breathtaking part certainly is the staircase seen by most people on their way to the bars. 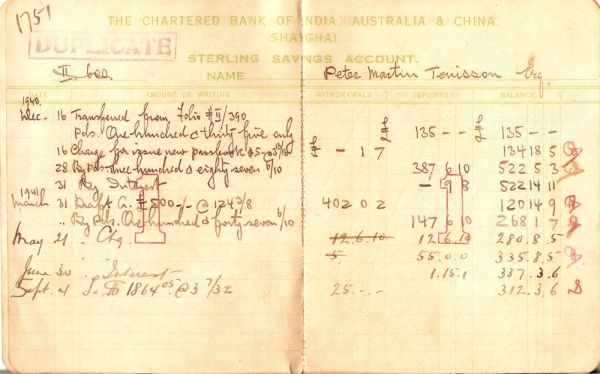 The original owner, the Chartered Bank of India, Australia and China was founded in 1853 in London, following the grant of a royal charter from Queen Victoria. The Shanghai branch opened in 1858. It developed in the city, financing trade between India, China and other parts the British Empire. Business must have been good, as the bank built its headquarter on the Bund in 1923. The building was remarkable, competing in style with others along the river… but at the end of the day, it was a bank. In here, like in any bank, people would come in to deposit and take out money, collect their salaries and make investment. Exactly like in today’s Bank of China, people would have a little booklet listing all operations executed on the account. I happened to find one of these booklets from 1940 (picture up and left). The last operation is from September 1941, as probably the client left Shanghai then. Everything was handwritten at the time and very well kept. The Chartered Bank merged with the Standard Bank in 1969 to become “Standard Chartered bank”. After leaving the country in the 1950’s, it has come back many years later as one of the main foreign banks now operating in China. Bund 18 is not a bank anymore, but I think about the booklet every time I go there and the building still is one of the jewel of the Bund.

2 thoughts on “Dancing in the bank”