While preparing for a trip to Europe next week, I found this interview of the stewart of the first Air France Paris-Hong Kong flight in 1938. Altough the short movie is in French it is worth looking for non French speakers. This 92 years old gentleman was originally from Vietnam. He was hired in Hanoi in 1938 as the “barm 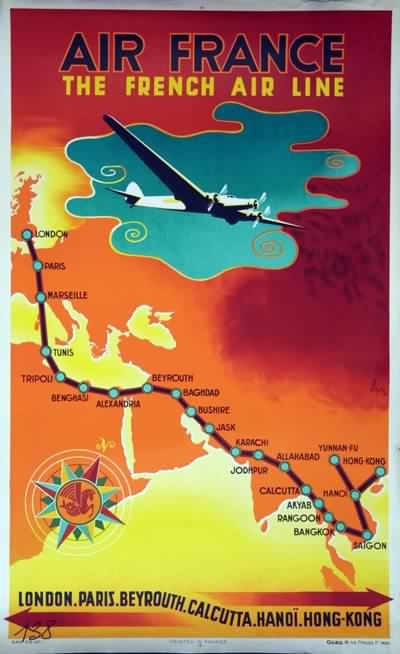 an” of the plane because he weighted less than 50 kg. He flew on  the new Air France line from Paris to Hong Kong, a trip that took seven days to complete.  The plane was a French Dewoittine 338 that took 4 crew members and 12 passengers. The short movie includes a few pictures of the first flight, as well as the inside of the plane with passengers enjoying their time while traveling. As said in the short movie, “air travel at that time was not so safe”, and passengers were not always sure they would actually reach destination.

In today’s jet age flight duration can still be quite a few hours, but it’s really difficult to imagine anybody needing one full week to travel from one major city to reach another one. Air France flight to Hong Kong included stops at many cities along the way including Alexandria, Karachi and Saigon, as shown on the map. Travel duration varied from 10 days to 2 weeks depending on the weather. The flight was branching out in Hanoi, with one leg going to Hong Kong, while the other was going to Yunnan Fu (Kunming nowadays) that could also be reached by train (see the post “Gare du Sud, Kunming for more information).

Air France flight to China was not the first international attempt for regular flights from Europe to China. Lufthansa organized a pioneer flight from Berlin to Beijing in 1926 flying over Siberia. The first attempt was never transformed into regular flights to due to the civil war in China and fights in Manchuria. However, Lufthansa and the Chinese State created an airline for national flights in China. 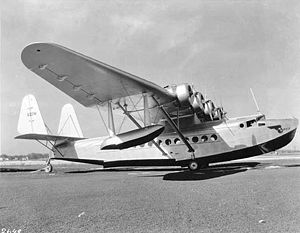 Started in 1930, Eurasia airline was flying around China. Operation were stopped in 1939.

In the same period, the British Imperial Airways extended its network from London to Cape Town, Singapore and Australia but never flew to Hong Kong, even less Shanghai. Panam flew San Francisco to Manila in the 1930’s the legendary giant sea planes, such as the China Clipper with Sikorsky S42 airplane (picture right). As Manila was the most important location for Americans in Asia, they never extended the network to Shanghai either.

Although Shanghai was the most important city of Asia at the time, I have never found any traces of direct flight from Europe or USA. The Japanese invasion in 1937 and civil war in China probably stopped it to happen, taking place just when these flight were technically possible. I have seen a plane resembling a Sikorsky S42 in a famous drawing of a view of old Shanghai… but it was probably a one-off flight or a imagination from the artist.

A few years after writing the original article, I read about a Paris-Beijing Air France line that was going through Shanghai. It is mentioned in “Les Français de Shanghai” as starting in 1936 until 1940’s interruption by the war. It seems in contradiction with the 1938 opening of flights to HongKong, as it was probably the same line extended to Beijing, that was not the capital of China at that time anymore and already invaded by the Japanese armies. In any case, if an Air France from Paris to Shanghai existed, it did not run for long as flights from Europe were canceled after 1940.

One thought on “No flight to Shanghai”