The recent movie “Lust, Caution” made the headlines because of the sex scenes that were cut off in the Mainland China version. “Lust, Caution” is based a novel from late author Zhang Ailing (or Eileen Chang as it is spelled in English). I had heard about “the Chinese writer who used to live on Changde Lu”, but it’s only after having seen the movie that I put the pieces together. Born in Shanghai in 1920,  Zhang Ailing is probably the most famous icon of this period in Chinese literature. A women of her time, she was (and still is) an icon of modernity. She was born in one of old and powerful families of Shanghai (she was related to Li Hong Zhang) but her family was not the ideal one. Her mother was a “sophisticated woman of cosmopolitan taste” (as introduced in her biography), partly 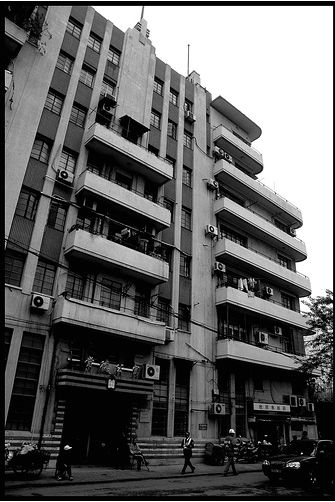 educated in England. Her father became an opium addict and locked her up in her room for nearly half a year when she was 18.  Zhang Ailing studied litterature at the University of HongKong due to the war in China and had to come back to Shanghai after 1941 Japanese invasion of Hong Kong. She became a real star Shanghai literature in 1943, when she published her first novellas and short stories and left China for Taiwan in 1949, before moving to the US.

Zhang Ailing lived in the Eddington House on Hart Road (now Changde lu). Built in the 1930’s it is a fine example of art deco apartment building. Traffic on Hart Road was surely less noisy and polluted than on today’s Changde lu, so living in this building was probably the mark of high social status. Eddington House still  has a lof of class. Its back is glass covered, now hidden by the brand new Swissotel Jing An. It’s interesting that the proximity of Zhang Ailing’s old apartement to the hotel is used as a marketing to 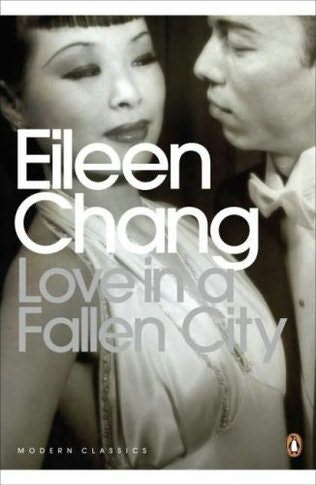 ol by the hotel company.  A bookstors-cafe has just opened at the bottom of the building with 30’s theme… the perfect place to revive old Shanghai with a coffee.

Some of Zhang Ailing’s most significant short stories have been republished by Pinguin in 2007, taking advantage of the success of “Lust, Caution”. I bought this book in Shanghai and read it a few days ago. The short stories take place in Shanghai or in HongKong during war time. “Love in a fallen city” giving its title to the book is the central novella, taking place in HongKong during the Japanese invasion. Zhang Ailing style is precise and touchy, immersing us in this troubled period. The book is both a very enjoyable and essential read for anybody interested in old SHanghai. I particularly liked “Red rose white rose” for its melancholic tone. Ailing Chang was a modern women in old Shanghai, but a number of issues she mentions are still very relevant in today’s Shanghai. Although little known in the West, she is very famous in Taiwan and China. Some of her novels have been turned into movies or theater plays.  Just ask any cultivated Chinese person, he or she will probably have read her books.

3 thoughts on “Love in a fallen city”