Hubei’s capital Wuhan is mostly known in today’s China to be a heavy industry base. The current city is the agglomeration of two cities on each side of the river. Wuchang on the right side is known for its revolutionary history, where the 1911 revolution started as well as center point of 1927 northern expedition to re-unite China. This is a legacy that still holds today. On the left side of the river Hankou the trade city was the location where foreigners settled in when the city was opened as a treaty port in 1862 and Hanyang a more remote part. Foreign concessions in the coastal area like Shanghai, Tientsin (today Tianjing), Amoy (today Xiamen) and Tschingtao (today Qingdao) are quite well known in and out China. Concessions and treaty ports were also established in-land, mostly on the main rivers like Hankou and canals like Suzhou. 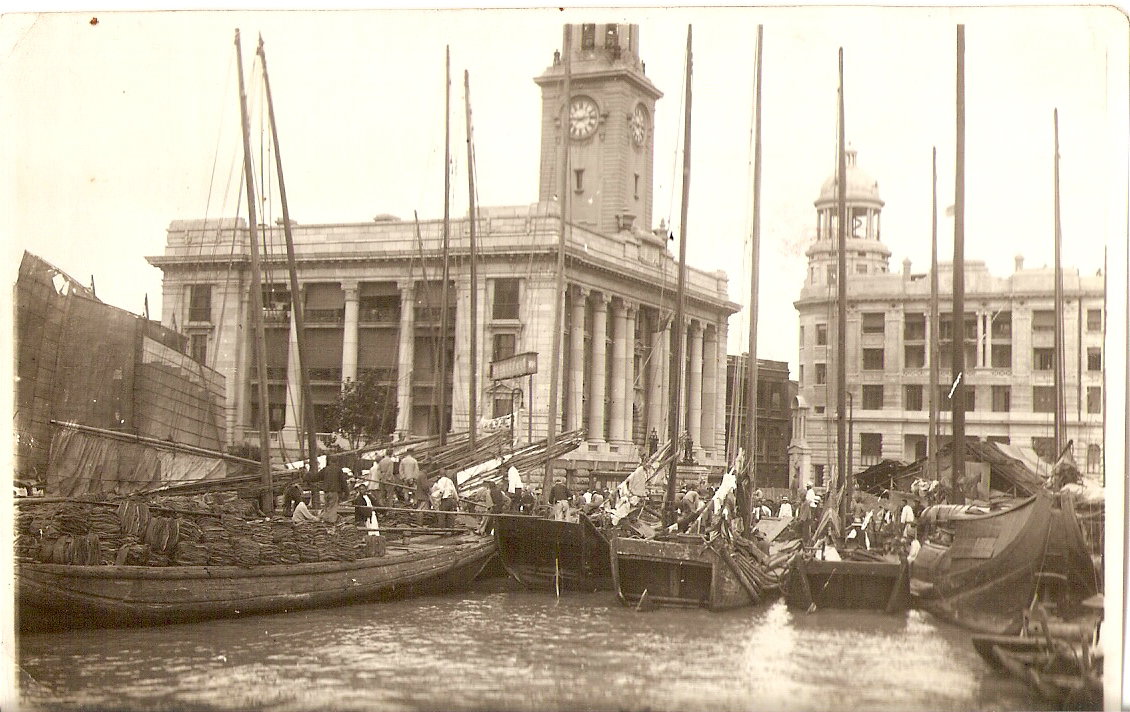 Being up the easily navigable part of the Yangtse river, Hankou was a major point of trade for China’s inland. Wuhan is still the most important port on the river today. The area around the customs house has been changed a bit by the enlargement of the Bund road like in Shanghai, but the buildings are still there and easily recognisable from the pictures. Just like in Shanghai, the Hankou customs house is a massive building that could be seen from far away, being probably the first point that visitors would see coming up the river, and it is still the main building of the old areas.

I used a recent business trip to Wuhan to spend a few hours in the old concession area. Unlike in Shanghai, the concession area is not (yet) in the heart of Hankou’s business district. The concessions were also much smaller than the ones in Shanghai, limited to an area near the river. I read somewhere that up to 1500 foreigners lived in the concession at the most. Just like in other locations, concessions of various countries were lined up next to each other on the Hankou Bund, with a different atmosphere in each of them. Hankou’s first concession was British, followed by Russian, French, German and Japanese. The custom house was located just off the British Concesion, as Chinese customs were delegated to foreigners at that time. Just like in Shanghai, their is a large commercial street perpendicular to the Bund with massive buildings lined along. This area has been pedestrianised and most building now host Chinese banks or brand new shops. It is quite similar to Shanghai’s Nanjing Dong Lu. The whole area is lined with Neo classical style buildings, similar to the ones on Shanghai Bund. As the British concession was seized back from China in 1927, there are only a handful of Art Deco buildings on that street as this style was only emerging in the late 1920’s and 1930’s.

The British Concession is the most visited part of old Hankou, but there are some other very nice parts next to it. The old Russian and French concessions have quite a similar atmosphere to Shanghai small streets of the French Concession, with pane trees shading the strong Hubei sun. Building there are not in great shape, but work in restoration would bring them back to their original glory. The most surprising for me was to find a Central European Art Nouveau style (also called secession) building in Hankou. Having lived many years in Central and Eastern Europe, I have seen many of those in Budapest, Prague, Vienna, Riga and so forth. Surprisingly, I never saw one in Shanghai as I think this was a mainly  European Style that was never popular in Asia as it was quickly supplanted by Art Deco. This was really a nice surprise to discover the building of the Daosheng bank, built in 1927 in Hankou, China.