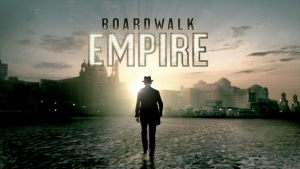 The roaring twenties was a period of economic growth and recovery from the horrors of WWI. WWI fueled Shanghai growth by cutting supplies from Europe and the return of links with Europe brought new opportunities to the city. In the USA, it was also the time of alcohol prohibition from 1920 to 1933. Manufacturing and transportation of alcohol was forbidden, creating enormous wealth for gangs controlling this highly profitable traffic. This is the background of the TV series Boardwalk Empire. The show is based on the real story of Atlantic City godfather’s and county treasurer Enoch “Nucky” Johnson. The series’ main character is Enoch “Nucky” Thompson, played by Steve Buscemi. Supported by a mob of gangsters and other shaddy characters, he fight to maintain his grip over the city. Like most series nowadays, the show has many sub-plots including love and hate stories and many unexpected events. It is highly popular and a great series to watch.

The show’s main attraction for me was obviously the look and feel of the show, taking place at the same period than the one interesting me in Shanghai. An enormous amount of work as been done to recreate the roaring twenties look and style, as well as a 1920’s Atlantic city. With famous director Martin Scorsese and broascast on a major Channel in the US (HBO), the budget for the series was one of the largest at about 18 million USD for the pilot… and it really shows. Exterior scenes were shot on a rebuilt boardwalk complete by a lot of CGI as shown in the short movie Boardwalk Empire VFX Breakdowns of Season 1. In depth research was used for rebuilding the 20’s atmosphere through decors, costumes and accessories… and it really shows. Roaming through a bygone era’s Atlantic city, I barely can stop thinking how great a Shanghai series with the same money and attention to details spent in would be. As I wrote before, there has been several TV series themed after Old Shanghai, like the excellent Shanghai Shanghai, but Boardwalk empire is still steps further.

Beyond the time period, the story of Boardwalk empire also has parallels in Shanghai. As alcohol trafficking generated immense profits for gangs in America, opium trafficking generated immense profits for gangs in Shanghai. The master of Shanghai was Du Yue Sheng, who was reigning over the city’s underworld as well as becoming a well respected anchor of the community. Just like Nucky Thompson, he managed to rise in the political system becoming one of the Chinese members of the Municipal council of the French Concession. Number of books have been written about him and he still is very well known in Shanghai. Similarly, he was known as a benefactor of the city to many, covering the dark side of his activity with largesses and a iron fist holding his “Bundwalk Empire”. However, the fascination for the USA for their roaring twenties gangster is not so popular in Shanghai and we have yet to see a movie or a tv series where the hero would be a Shanghai gangster.