Although they now have mostly disappeared, barbershops were a central point in men’s life until WWII, including in old Shanghai. Until the early 20th century, a single blade razor was the only razor available. It was quite dangerous and required to be really skillful to get a clean shave. With a double edge safety razor invented by Gilette in 1904, shaving got easier but still required quite a skill to cut a good shave without cutting oneself. This kind of razors became popular in the 1920’s and 30’s, allowing people to shave themselves every day and reducing the business for barbershops.

Barbershops were men only stores, offering services such a shaving, hair styling and other beauty treatment. They were also a a great place to socialize and have chat with friends while getting shaved or groomed. Barbershops were a social institution, as men had to go several times a week to keep a clean shave. For some, in particular business men, they were part of the daily routine, at a time when business was conducted over letters and telegram (see post Lost in transmission), much slower than today’s emails and mobile phones. It’s easy to imagine men in Old Shanghai going to the barbershop to get a clean shave on their way to the business district of the Bund.

There was surely many barbershops then as this kind business does not need much infrastructure. People would come and get a shave or an haircut, not appointment. As the time needed is much shorter than for women hairdressers sessions, one just had to come and wait for his turn to get serviced while drink tea or water and chatting to other patrons. The shaving process would normally include the nice hot towels applied on the face of the patron before starting the actual shaving.

Having seen this many times in movies, I tried to get a proper shave in Shanghai. Barbershops have long disappeared and it took a while before finding a proper man barber ready to cut my beard the old way. The shop I found (on the internet), is located in the same building as the paramount dance room (see post Paramount suicide for more details), whose upper floors are (again) in ruinovation. It is one of those state owned hair dressers that now tend to disappear in favour of the fancy private ones. Actual location is 230 Yu Yuan Lu. I’m not sure this always been a barber shop, but being a state owned one in an historic building, it is very possible. In any case, the barber has been shaving men for many years and he did an excellent job. 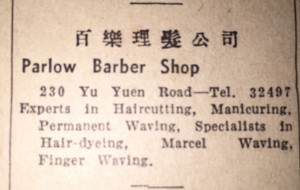 After the shave, I searched in an Old Shanghai phone book, I found only two barbershop with a phone line… in 1938. They were probably the most prosperous as having a phone line was not cheap at the time. I took me a while to realise that one of them “Parlow Barber Shop” was actually located in the same place than the place I went, 230 Yu Yuen Road. In Chinese it is cold Bei Le barbershop, just like Bei Le Men, the Paramount theater that was located in that building. The phone number has changed and “Marcel Waving” are not fashionable anymore, but this place is still a nice old fashion barber shop. I will be going again for a time travel and a shave at the same time.

I also looked up the second adress in the phone book. The Nanking barbershop was located at number 734-6 Bubbling Well Road. Today’s 734 Nanjing Xi lu is also a state owned hairdresser. In Shanghai, some things never change.