With its mix of influence, Old Shanghai had bits of pieces coming from all over the World including Beaux Arts style, Art Deco, Andalusian, Mexican revival, New Normand, German, traditional Japanese to name a few. They all added up and sometimes got inspired by traditional local style or its modern incarnation, neo confusion (sometimes called Republican style). While walking around in Old Shanghai, it’s sometimes surprising to see details that are heavily influenced by another place.

I have been fascinated by the floor tiling pattern in the picture up, since I discovered it a few years ago. The original picture was taken on the ground floor of the FONCIM D building (1933) at the corner of Jian Guo lu and Gao An lu. The building was designed by the firm Leonard, Vesseyre & Kruze (or LVK) (See post ” Shanghai Art Deco master” for more details or my article, in French, in Lepetitjournal.com Shanghai edition). The firm was highly creative and the building was designed for their largest client, the FONCIM real estate investment firm, so I first assumed it was unique.

The only other similar pattern I found was in a villa on Yong Jia Lu, a few hundred meters from the FONCIM building. The area was built by the LVK firm (Leonard and Vesseyre’s personal homes are nearly opposite from this building), including this one, probably from the mid 30’s. The tiling shape is slightly different, with the beige stripe wider, but still very similar. This was the only place were I saw this pattern until a recent trip. A later found a similar pattern with different colors in a building on Hunan Lu (see post more on tile patterns).

Having diner in Paris a few days ago, I realized that the early 1900’s building had been extended by an Art Deco part with the tiling on the picture right. It took a while to retrieve the Shanghai picture, but when confronting both, the similarity was striking. So the Shanghai Art Deco pattern was probably not the invention of LVK, but probably imported from France. Looking for more about this pattern, I received a big help from my friends of the France Art Deco Facebook group (https://www.facebook.com/groups/franceartdeco). 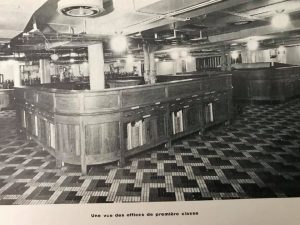 A similar pattern was used for the flooring of the kitchen of flagship cruiser SS Normandie. Launched in 1935, SS Normandie was the largest cruise ship of its time, a floating palace fully designed in Art Deco Style. Because of WW2, it only operated a few years before sinking in New York in 1942, but it is still a legend in term of cruise ships, technological achievement and as an Art Deco masterpiece. Exemple of the ship’s decoration was shown in the Paris Art Deco exhibition in 2014 (see post “1925, when art deco dazzled the World” for more details).

Unfortunately, all pictures of the Normandie are black and white, so it’s impossible to know the original color of the kitchen tiling, but in any case it looked quite similar to the one used by LVK on Jian Guo Lu. As the pattern originated from France and it is so rare in Shanghai, it is likely that the actual tilling was imported from France. Shanghai was a modern city, in touch with the latest fashion in the World… just like it is today. 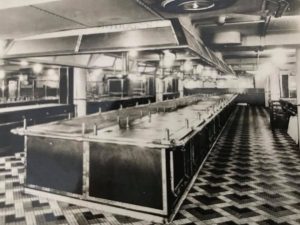 4 thoughts on “Déjà Vu from Paris to Shanghai”