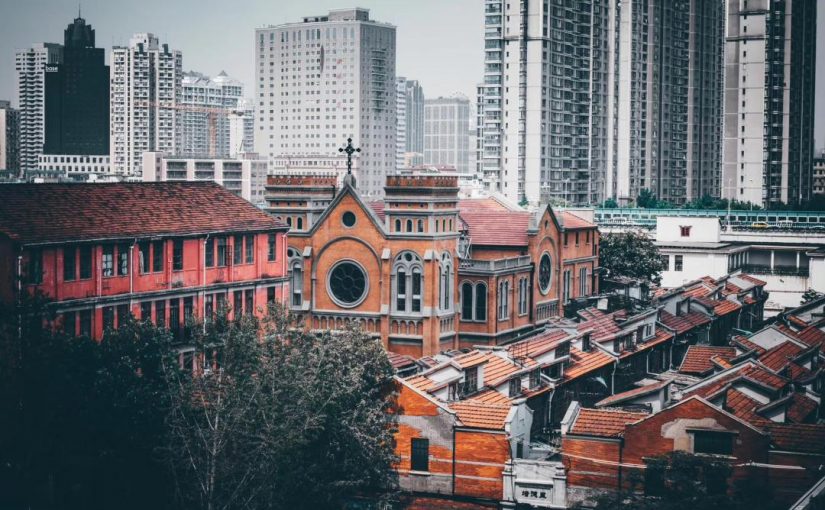 This church is hidden in the labyrinth of lanes from 370 Da Tian Lu, currently in Jing An district. When I first found out about it, it was really difficult to see from the outside as the whole are area was surrounded with blocks and block of lane. This area has now changed tremendously, with most of the blocks now transformed with tower blocks and sometimes a park. This picture from my friend Shi was a good opportunity to write a post about Saint Therese Church.

There is very little information about Saint-Therese of the Child Jesus (or Sainte-Thérèse de l’Enfant Jésus as it is known in French) to be found. The Catholic Church was built in 1931, on the spot of former Saint-Joseph Church damaged during 1927 fights. It is of neo-roman style, with double front columns. Construction started on 30th Octobre 1930 and the Church was consecrated on 3rd October 1931 by Mgr Auguste Haouisée, who later became the first bishop of Shanghai.

Saint Therese de Lisieux was a French Catholic Discalced Carmelite nun who became widely venerated in the 20th century. She was canonized in 1925, and named co-patron of the missions, with Francis Xavier by Pope Pius XI in 1927. As Saint-Therese was highly venerated at this period, the dedication to her was an obvious choice. Mentions of several Churches dedicated to her in Asia around the same period were found during the research for this post, including Hong Kong, Singapore, Hangzhou and Saint Theresa Cathedral in Changchun.

What makes this Church special in Shanghai is that it is a Catholic Church located in the International Settlement, where Christians missions where mostly seated. It is away from the French Concession, where Catholic Church was predominant, as well as away from Xu Jia Hui Jesuits area. It is also in a area that was mostly Lilongs, the local style of accommodation, away from the areas where most foreigners lived, so probably aimed and maybe financed by the local population.