French journalist Bruno Birolli was stationed in Tokyo, Hong Kong, Bangkok and Beijing for more than 23 years. After two non-fictions book about Asia history, he published “Le musical-hall des espions” in France in 2017. I have read and written about quite a number of Old Shanghai novels like The master of rain” or “Night in Shanghai“, as well a Paul French book on Shanghai Gangsters, City of devils. Since I also love reading crime novels, one taking place in Old Shanghai could only attract my attention.

Birolli novel’s title, ” Le music-hall des espions”, could be best translated as “Theater of spies”. The novels takes place from 1930 to 1932 and focuses on French man René Desfossées, who is sent to political unit of the Shanghai French Concession Police. Main characters include his boss, Commandant Léo Fiorini along with Archibald Swindown, a colleague from the International Settlement police. As historical events unfold in Shanghai, their police work will make them meet various people including the chief of police for the Kuomingtang government, other members of the French police, a magician, and many more. The action is mainly located in Shanghai, the city could be considered also as one of the main characters, along with a short part in Hankou’s French Concession.

The author has spent years in Asia and it definitely shows in the book. I often found that Old Shanghai novels lack the climate, noise and smells of the city. They are all here. The dampness of the city after the rain, cold waves that freeze it a few days a year and other mentions of the city’s weather just feel like the real thing. Neither are missing the smell of Chinese food or of coal burning, the noise of people shouting in the streets and the honks of cars, giving a vivid portrait of the city.

Birolli’s interest in early 20th century’s Asian history and journalistic experience is also showing. This makes his version of Old Shanghai very accurate, taking into account the time of constructions of various roads and buildings. Actual historical events are developing in the background and are fully integrated in the story. One can also find numerous references to real history characters of the time, the most obvious one being the Commandant Fiorini, whose name is a direct reference to the real Captain Etienne Fiori who ran the French Concession police from 1920 to 1932. Characters have deep personality and there own history influences their actions and decisions in a very realistic way. Probably a little more explanations would be welcome by readers unfamiliar with the settings and Shanghai history, but the novel is making it a very enjoyable trip to Old Shanghai.

Although the background, historical events and characters are very credible, the books feels sometimes more like a photograph of an era, than a real crime novel. Having read many of those, I was expecting more speed in the story as well as a more sophisticated intrigue. Writing style is still very journalistic, as opposed the punch that one could expect from great noir novels, like “Perfidia” by James Ellroy or an historical spy novel like “Carnival of Spies” by Robert Moss.

In any case, I enjoyed reading the book and it highly recommended to anybody interested in Shanghai history. Unfortunately, it is only available in French so far. 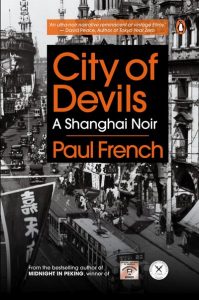