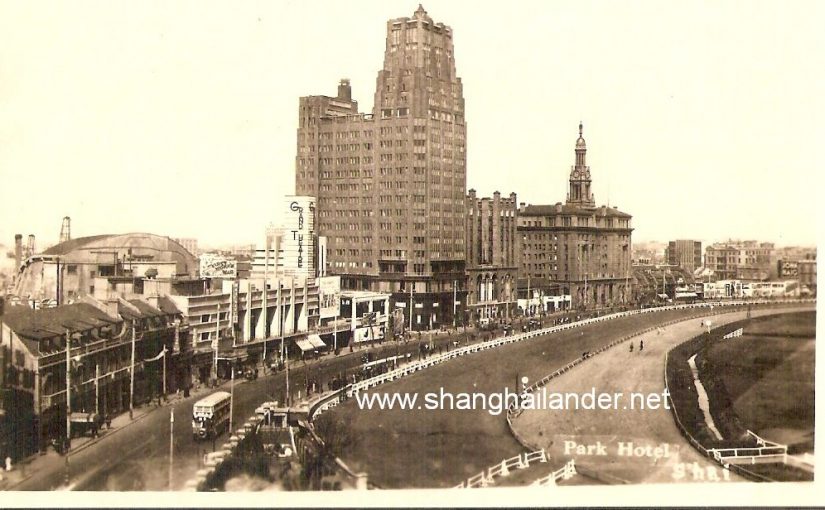 The horse race track of Shanghai (today’s People square) was at the center of the entertainment district in Old Shanghai. Hotels were built in the neighborhood including the home of Chinese stars, Yangtze Hotel (see post Yangtze Hotel for more details), the Great China Hotel and the New World Hotel.

Lászlo Hudec Park Hotel opened in 1934 on the Northern of the race track, on Bubbling Well Road. Financed by the Joint Savings Society, a major Chinese financial institution, it was a clear attempt to compete with the Cathay Hotel that opened a few year earlier on the Bund. As displayed in the advertising material below, entertainment was the main point of the hotel’s offer. If the Cathay was the home away from home for foreign travelers, the Park Hotel was designed with residents in mind, as well as guests coming to enjoy the race track and other local entertainment establishments. Those included the neighboring theaters (Grand Theater, Nanjing Theater and Metropole Theater), as well as the shopping temples on Nanjing Lu (Wing On, Sincere and Sun Department stores) as mentioned on the below map.

I particularly like the hotel silhouette and the characters displayed. Their dress look very much like characters from movie Casablanca. Another specific feature is the display of parts of the Chinese city (Longhua Pagoda and the Civic Center, in today Yangpu district ) as possible tours destination from the hotel. Although Longhua Pagoda was (and still is) a major tourist destination, the new Shanghai area of Jiangwan was rarely mentioned in foreign guides.

Using the same concrete raft technique as the Cathay, the 24 floors building was the highest of Shanghai… and in Asia. It only lost the Shanghai crown in the 1980’s when high buildings construction restarted. For decades the Park Hotel tower dominated Shanghai sky. The view from the top floor was unobstructed and stunning, as seen on the picture below. From up there, one could practically see the whole of Shanghai. For people of the time, this view must have been as stunning as the one from today’s Pudong skyscrapers.

Since most of the original Art Deco interior and furniture has disappeared, the Park Hotel does not compare to today’s luxury hotel anymore. The exterior is now roughly back to its original design, but inside only the ball room of which the circle floor was designed by German Bauhaus trained architect Richard Paulick has survived.  When Park Hotel opened though, it was one of the best of Shanghai, competing not only in height but also in the best services with the Cathay. Below is a rare advertising leaflet for the

Pictures of the original Park hotel and decoration are extremely rare, but the hotel was clearly of the highest standard. It hosted two major restaurants, the Main Dining Room “remindful of the choicest wines and Epicurean French Cuisine” on the second floor and the Grill room on the 14th floor “which has a reputation on its own”. 14th floor was also the location of the Sky Terrace, I am preparing a special post on this one.

It also had a lounge on the 3rd or 4th floor, ideal location for drinking cocktails while watching the horse races. The highest attention was put for the kitchen… though no Chinese restaurant is mentioned.  “The pastry cook has his place, and quite an important one” as high teas were (just like today) an important market for the hotel. The Park Hotel’s pastry reputation survived the years, as it was one of the few places to buy cakes until the bakery revival a few years ago. It was particularly famous for its Palmiers, or “butterfly cookies, Hu Die SU” as it is called in Chinese, that are still on sale today (Please see post “Tasting Old Shanghai” for more details).

It was quite a shock when I discovered this leaflet in a market in Shanghai more than 12 years ago. It can date it from 1937 or 1938, as I know from other sources that Mr T M Lamb was the GM in 1938. Nearly eighty years later, this advertising for Park Hotel looks very much like today’s top hotels promotion material. Another form of advertising for Park Hotel was hotel luggage labels, see post “Old Shanghai luggage labels” for more details.

The former Shanghai race track (today’s People Square) remains an open space in the middle of the city. Horses racing around the horse track are long gone, but pictures of the race are a common sight nowadays. Although the Shanghai Race Club is also long forgotten, people are once again enjoying the view from the top of the building that is now the Shanghai Art Museum,  having a drink or a bite at (now gone) Kathleen’s 5 restaurant. What is much less known is what the inner space of the race track was used for.

The Shanghai Recreation ground, as it was known then, was a massive sport center. The large open space was divided in a number of fields accommodating various sports and activities. The Race track was used only periodically, but the recreation ground was clearly an everyday feature of Shanghai’s life. Like in many other places, British colonists brought there love of sports and horse racing with them, and they combined them in one location. A similar feature is still in used today in Hong Kong’s Happy Valley sport ground that is enclosed within the horse race track.

The Shanghai recreation ground was remodeled twice a year to accommodate a winter and a summer layout. Winter layout for 1938 (pictured) included 4 “soccer” grounds, 5 hockey grounds and 2 rugby grounds. Just like today’s expat, foreigners in old Shanghai would spend their winter weekends enjoying some fresh air while practicing team sports, all of it followed by a sizable amount of drinking. Having been a rugby player for a few years, I get a good picture of the “after matches atmosphere”. The summer layout included a baseball ground and a polo ground, another sport that is again practiced in Shanghai though in a far more remote location nowadays.

Similarly to Singapore’s cricket club, there were two pieces of ground reserved for the “Shanghai cricket club” and the “Shanghai recreation club”, both for cricket and tennis. The Shanghai cricket club also had a club house or a “pavilion” built on the side of its dedicated plot, it was roughly where Baraborossa restaurant is nowadays. The pavilion, a mock Tudor style building can be seen on the top left hand side on the picture above. The map also displays the SLBC (Shanghai Lawn Bowls Club) pavilion, as well as a few bowling greens. The most surprising feature was a 9 holes golf course with the tees spread over the whole field. The first tee and the 9th green were conveniently located near the golf pavilion, perfect for a drink before or after a game of golf. At some point, the Shanghai recreation ground was also used as a military airfield. At that time there was probably no time to play golf anymore.