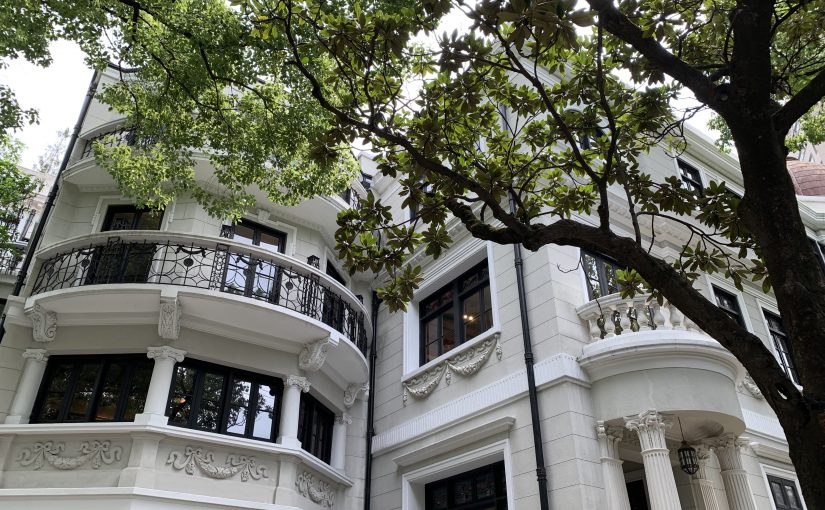 The Rong Mansion on 186 Shaanxi Bei lu is one of those places that Old Shanghai lover wants to visit. I had a chance to be part of a full tour of the house thanks to Historic Shanghai and I am happy to share pictures and impressions about one of the greatest Old Shanghai property in the city.

The original house at this location was built around 1909-1910 by a German Jewish family. The garden was much larger than today, going all the way down to Weihai Lu. Bubbling Well Road (today the busy and upscale Nanjing Xi Lu) was a road to the countryside with large residential domains on each side. The house was in the neighborhood of Silas Hardoon’s Aili’s Garden (completed in 1909) and Mc Bain building that later became the Majestic Hotel.

The mansion was purchased in 1918 by the Rong family, as the original owner did not come back to Germany after WWI. The Rong family was one of the richest Chinese family in Shanghai. Although the house was remodeled and expanded several times there are definitely parts dating back from the construction time. This particularly true on the ground floor, where the smaller reception room is located, as well as the rooms above it, that formed the core of the original building. Tiles in this room is one of the few Art Nouveau details that can still be seen in Shanghai. Similar tiling can also be seen on third floor above. David star is also displayed in both places, probably thanks to the original Jewish owners.

Glass work has been amazingly preserved through Shanghai history and magnified by the beautiful restoration by Italian designer Roberto Baciocchi. The villa has one of the the largest collections of original Art Nouveau stained glass Windows in Shanghai. Only comparable to former College Français on Rue Vallon or the CMLI building on Guangdong Lu.

Great care has been put into cleaning, restoring or recreating the original materials. Besides glass work, this included tiles, wood floors and wood wall panels. The most iconic piece of the house is surely the stained glass ceiling of the main reception room. The only similar piece in Shanghai is the stained glass ceiling at the former Cercle Sportif Français, today’s Okura Garden Hotel.

It’s difficult to say whether this was part of the original design or added later. I would think that it was added in the 1920s or 1930s with such a strong geometrical Art Deco center… but the outside (see picture below right) is much more Art Nouveau. It still feels like the original ceiling was more a traditional Central European style which part is still visible today (picture down left), and that the stained glass ceiling was added later.

Going through the Rong Mansion is like a trip to Old Shanghai, until realizing that it is in the heart of bustling Jing An District when getting in the garden.

The house can be viewed when exhibition take place there, but often parts are covered or off limit for visitors. We had the chance to get the full viewing!