“Territoires et populations des confins du Yunnan” is a book I bought in an antique market a couple of years ago. Published in 1931 by French Beijing-based Henri Vetch company, it was actually printed by the Commercial Press in Shanghai. The author Joseph Siguret was also the French Consul from 1926 to 1953 in Beijing and later in Taipei. For this book, he was mostly a translator, as the original was published in Chinese with the support of the Guo Ming Tang a few years before. The original book (云南边地问题研究）was created by Long Yun 龙云, the then governor of the province.

The book is made from travelers notes, going to remote areas of Yunnan. France had strong interest in Yunnan due to the proximity of Tonkin ( part of French Indochina, today North of Vietnam), so having a French translation is not that surprising. As described in posts “Barney, Journals of Henry Virden Bernard” and “Gare du Sud Kunming” taking the train from Hanoi to YunnanFu (today Kunming), was the fastest way to reach Yunan. Since I was traveling to LiJiang, one of the most famous parts of Yunnan, I took this book with me to read it at those scenic places.

Air travel and mass tourism have changed Lijiang a lot, but the city was already of high importance in the 1930’s. “Li-Kiang” was a sub-prefecture, the commercial center of the whole North-West Yunnan. It was the place were Tibetan products were brought down from then mountains, the place where mountains minority would meet Chinese civilization. The tiger snow mountain is also mentioned, its beauty being as attractive to the author as it is to tourists today.

What really made the trip fantastic was our host and guide Lao Xu. He drove us around for three days, telling the story of his province and taking us to remote places. One of the first foreigner to live in the area was Dr Joseph Rock, an American who studied flora in Yunnan from 1922 til 1949. He is mentioned in the book and Lao Xu took us to place he used to lived. Lao Xu also took us to a Buddhist monastery, meeting the Lamas and admiring the rich colors of the decoration. Beyond the beautiful Lijiang valley, we also went to the Laxi lake in the next valley from LiJiang, that is becoming the next tourist point. What was really out of the ordinary was taking us with him on a trip in the deep mountain. Going up with his friends uncle who knows all the road, we went up to a village where he had never been and where I was the second foreigner ever to come (after somebody from UNESCO a few years ago). The small Yi village hanging near the top of the mountain is so remote that there is no paved road to go up. Being up there felt like a time travel, just like the description of minority people in the 1931 book. Somehow, meeting the old lady in the picture and been invited to her home was really magical.

Today’s Lijiang changed a lot compared with the one described in the book, with millions of tourists and the old town turned into a massive shopping center (with a surprisingly large number of African drums for sale). However, changes has not gone very far from the city yet and remote places like this village still exist. Probably for not so long. 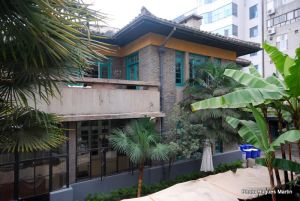 Treaty ports in China were mostly on the seaside (like Shanghai or Tianjin) or on rivers (like Hankou, Wuhan today). However, some were not even near any large water, like Kunming. The city is best known as the gateway to Yunnan touristic areas such as Lijiang, Dali, Shangri-la or  Xishuangbanna, but few people have heard about the old French presence in  Kunming. 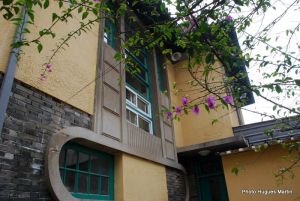 Based in neighbouring Indochina, the French started to look at a railroad from Kunming to Haiphong (port of Hanoi) in 1885.They got the right to build the link from Kunming to Laocai (north Vietnam) in 1898. The Compagnie des Chemins de fer de l’Indo-Chine et du Yunnan (CIY) was in charge of building and running the railway service. France never actually attempted to attach Yunnan to Indochina but the “Transindochinois” railroad was open in 1910 . Conveniently, Kunming became a treaty port in 1908. The train from Kunming to Vietnam still runs today, but apparently only for goods. I had the opportunity to travel on the Vietnam part of the track in 1998, from Hanoi to Laocai and back. 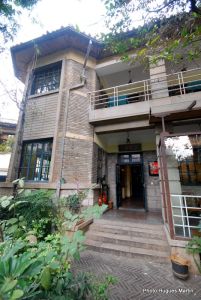 It’s by random that we discovered the remain of Kunming South Station (Garedu Sud, both photos up). The station buildings have become a fancy restaurant, but the building shape is still clearly visible, as well as the art deco motives on entrance wall. The station building is now hidden between ugly apartment buildings and difficult to find. Although the only one shown in the guidebook, it’s not the only reminder of the French presence in Kunming. Located next to the river, the mini French area also encloses a few private villas of western style (photos left and right) next to the station, very similar to some found in Shanghai or in Xiamen. A little hidden between the trees, they also have been turned into restaurant, but are worth a visit. Guards there are a little surprised to see westerns taking pictures having a look is no problem. Those buildings all wear a plate from Kunming municipality, so one can hope that they will be preserved.

It’s while walking in the surrounding area that we got the biggest surprise. A colonial building is hidden behind the brand new Kunming hospital.  Like in Shanghai’s Ruijin hospital, building #1 of Kunming people hospital was probably the original French hospital of Kunming. 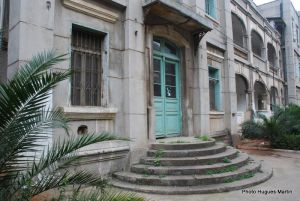 The front side in today’s hospital’s courtyard has been re-painted, but the backside (picture down) has not seen any renovation since a long time. Fortunately the inside rot iron decoration, round staircases and terrazzo’s floors are still there. Despite the age, the building still has some character. Since it also has a preservation plate, one can hope it will be kept.