In a recent trip to an antic market, I ran into a large stack of old papers. They were sketches and drawing from an unknown artist. I was not really interested… but my friend was. He looked at all the drawings one by one, spending so much time with them that I was already moving a few vendors down the line. He called me back and pointed out to these three envelops that he found but had no idea what they were. One of them is the picture below.

“Compagnie Francaise de Tramways et d’Eclairage Electrique de Shanghai”, i.e. Tranmways and Electric Lighting company of Shanghai, was written on the envelop. The largest employer of the French Concession, “La Compagnie” as it was often called, was the main utility company of the concession, producing and delivering electricity, supplying running water and operating tramway lines (see post “Old Shanghai Tramways” for more details), as well as bus lines (see post “Old Shanghai full bus schedule 1931” for more details). One of the managers was Mr Lubeck (See post “The story of the Lubeck family and their house in Shanghai” for more details).

These three little envelops, contained three electricity bills from May, June and July 1949. As China was liberated by the communist party in October 1949, they were among the very last ones to be sent by the company under the nationalist regime. The company was later nationalized and surely part of today’s electricity company.

The bills themselves are in English and Chinese, with no French writing except being called “Facture” and the phone number indicated as “téléphone”. Just seeing the name of the company written in French is like a living proof of the very existence of the French concession. Details and daily life objects like this make history become so much more real. 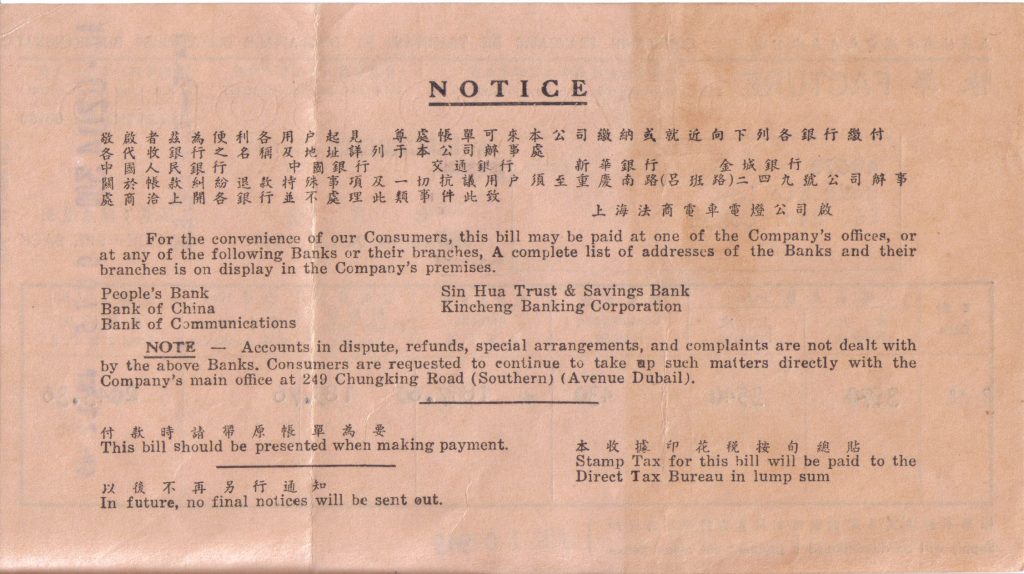 The electricity company address was noted as 249 Chung-King Road (Southern), that is formerly Avenue Dubail. Street names have been changed several times in Shanghai, including in 1945 after concessions were given back to China. The whole former Avenue Dubail has been destroyed in the 90’s to build the famous flyover motorways of Shanghai, so the office probably does not exist anymore. The address where it was sent to, “Seng Sie Leu, 256 Route Cohen” (now Gaoan Lu) is very near from my street, Route Kaufmann (now Anting Lu). It would be funny seeing the face of the house owner, being shown those unpaid bills from 60 years ago. This is only daydreaming, as the receiver of these electricity bills has probably been chased out of their house long ago.

In any case, after a second look I realized that the bills have actually been settled in July 1949. No chance of collecting any money from these old bills, but just looking at them is still fascinating.

One thought on “Unpaid bills”