Living on Route Kaufmann (today Anting Lu), I have spent a lot of time looking around the neighboring old buildings. This street is a short one, a side street from Route Herve de Seyes (Yong Jia Lu) and Route Joseph Frelupt (Jiang Guo lu). It is located in the Western part of the French Concession, that was really developed in the mid-late 1930’s. The name in French on the 1927’s map is Route (and not Rue) indicating that they were rather country roads than urban streets. This is similar to Bubbling Well Road (Today Nanjing Xi Lu) in the International Settlement. As this area was not really urbanized, developers could buy large properties and build large garden villas. Many wealthy foreigners and Chinese families lived in this quiet and relaxed neighborhood.  Since most of these villas had garages, people living in the area had surely cars, and the streets were probably filled with 1930’s Cadillac and other Ford and Renault imported from Europe and the US. The atmosphere then with the streets lined up with walls masking great brand new villas must have been quite similar to today’s HongQiao area with the Villa’s compounds.

Most of those villas are now closed to the public with iron gates stopping the occasional visitor to come in. As I live in the neighborhood and spend a lot of time around with my camera, I am becoming well known by the old people mostly living in the villas. A little bit of Shanghainese language often does the trick and allows me to take pictures without disturbing anybody. I have often seen the house on 130 Route Kaufmann behind the wall, I recently got the chance to get in and take pictures.

This house is very similar to houses of the same period built in France. There is no mention of which firm actually built it, but it could very well be Vesseyre & Leonard, since 2 other houses in the area are of similar style and were designed by the famous French architect house in Shanghai. The entrance has seen better days but still keeps up appearances. I particularly enjoy the covered front that is creating an outside entrance hall. Like similar houses in France, shutters were installed on ground floor windows. It is quite rare to still see them in today’s Shanghai.

I then moved to the inside, while talking with a lady living there. The picture left is the actual entrance door, still in place. The round part on the top was probably a glass and metal ornament. It must have been smashed at some point and replaced by the cheaper piece of wood.

Original inside doors are still in the building, matching the pattern of the entrance door. The farthest door leads to the what is the kitchen today and I think was the main kitchen in the old time. It has a back door, so that domestics could come into the kitchen without using the main entrance door, using the back service entrance instead. The nearest door leads to the bathroom… with appliances from the 1930’s still in place and still in use though it does not seem to have been cleaned for a long time. I have visited houses of the same period in France, still in great conditions. This house has just been so neglected. 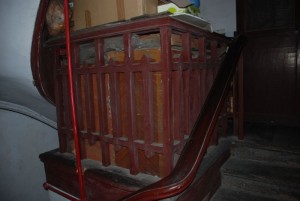 Moving up through the stair case, it is easy to realize the money and time spent into creating this house. After years of over use and neglect, the staircase still looks great, including the small inside balcony (picture left). The house does not seem to have structural damages apart from water leaking over the main entrance. It is always amazing to see how these houses have survived decades of over use and neglect and are still standing. People living in this houses mostly have no idea of the value and craft that was put into building them. Then often pay very little if anything at all to live here, so why bother taking care of a building that is just (in their mind) an old ruin? Similar houses in France that have been well maintained still looks grand and those in Shanghai could be turned back to the same grandeur.

7 thoughts on “Portrait of an old neighbour”