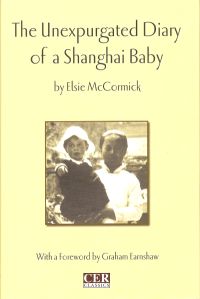 I still don’t understand how come I did not see this book in Shanghai… but bought it in Beijing instead. “The Unexpurgated Diary of a Shanghai Baby” is captioned by Graham Earnshaw as his “favorite book on old Shanghai by a long margin”. I knew the name of Graham Earnshaw throught Tales of Old Shanghai website, but I had not heard about the book before. After flipping through the pages for a minute, I bought on the spot and read it over in the train from North Korea.
The book is the mock diary of a one year old baby living with his parents in HongKou district. First published in 1924, it’s a first hand witness of the life of the Shanghailanders. It is a lot of fun to read about the live of the father going to play golf and spending hours drinking at the club or at the race course. Dady probably works to support the family, but little mention is made of it in the book. Mummy’s main occupation is to give away the baby to the Amah (as Ayi were called then) and take care of her appearance. Staying with the family, Auntie (surely Mama’s younger sister) is going out with a boy or another, but does not seem to have a lot of brain. As all the nearby places the baby goes to are located in HongKou district, mainly “HongKew park” (today’s LuShun Gong Yuan),  I guess the family lived in an appartment on Sichuan Bei Lu  or the neighboring streets not far from the Suzhou creek.
Like a number of today’s expatriates in Shanghai, the kid is mainly raised by the Chinese Amah, giving us a great view of the life of the chinese domestics in foreign houses. The story of the houseboy stealing socks from the master, or using the lady’s fine garments and toiletries for cleaning purposes are hillarious… and not so far from stories I have heard in today’s Shanghai. The Chinese servants run every practical aspects of the house with the foreign owners having little control or understanding of it. This is also not so different from today’s foreigners’ life in Shanghai.
The writing is easy to read and very humorous, with Elsie Mc Cormick making fun of foreign life in Shanghai. It is a great introduction to old Shanghai, but also contains many details of the period that make in an invaluable resource for research on this topic. The writer went back to the US in the 1930’s and started to write for the New Yorker later on. As a proof of a writer’s quality, you hardly can get better.

2 thoughts on “The Unexpurgated Diary of a Shanghai Baby”