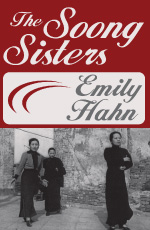 The Soong family was clearly the most influential family of Shanghai in the Republican period. Their legend is still felt in many places in Shanghai, bringing with them as many stories real or imaginary. I have read books about them before, but Emily Hahn’s “The Soong Sisters” is the most personal account anyone can find about these three ladies that shaped China.

The book was written in 1941, when the Japanese army had already invaded a large share of China and Chiang Kai Shek government had been forced to move from Nanjing to Hangkow (today’s Wuhan) and later to the distant Sichuan city of Chongqing. The whole government was moved westward, along with foreign representatives and friends as well as any factories that could be transported. Written while the city was being bombed by Japanese planes, the book clearly had a political message trying to make the Chinese governement more personnable and appealing to the full support of Western Countries, in particular the USA. Besides the political aspect, “The Soong Sisters” is also the best documented book about the life of the family. Emily Hahn turbulent lifestyle allowed her to get very close to the Soong family through her love relationship with Chinese poet and publisher Shao Xunmei. Knowing the Soong Sisters personally allowed her to give a great pictures of their personality and oppositions.

Charlie Soong incredible journey to the USA and his education there made him a very singular character in early 20th century China. Although not a Shanghainese, the open city was the only place he could live in China when he came back, taking a house in Nanshi (now part of Huang Pu district). Charlie Soong was a precious aid to Dr Sun Yat Sen, using his bible printing company as a cover for printing political material for the future leader of the Chinese revolution. Giving his daughters and education was already quite a shock for the time, but the top of it was sending them for schooling in the US.

The three sisters attended McTyeire School for Girls in Shanghai (in today Changning district), and graduated from Wesleyan College in Macon, Georgia, United States. They came back transformed, converted to ideas unknown in China, in particular the will to choose their own destiny. Soong Qinling was the first woman to ride a bicycle in Shanghai, before fleeing the family home to get married with Dr Sun Yat Sen. Soong Ailin married Dr HH Kung, who became the finance minister of China for the Kuomintang government, replacing TV Soong (one of the brothers of the Soong sisters) in 1933. Soong Mailing, probably the most well known, got married with Chiang Kai Shek in 1927 in the Majestic Hotel (on today’s Nanjing Xi Lu). She became mostly known as Mme Chiang Kai Shek, a political figure of Republican China.

Emily Hahn’s “The Soong Sister” is a fascinating book giving close contact with these three ladies with an incredible destiny. Definitely a must read for anybody interested in old Shanghai.