Former Laos royal capital of Luang Prabang had been on my travel map for years before I finally reached it in early January 2013. This post is not directly linked to Old Shanghai, but buildings and architecture in this place where built as the same time and the past definitely creates a bridge between them. Just as last year post about Rangoon was a link to a former British colony, this post is about a trip to the former French colony of Indochina.

Just like river treaty ports in China such as Hankou, French posts in Indochina were not limited to sea ports but also included ports on river. Up the Mekong river, Luang Prabang was a royal capital and French colonists helped to develop it. Besides wood buildings that were the original houses used, the French colonial built a series of official building and houses, directly copied after French style. The best example was surely the school buildings, that looked pretty much a like a French school from the same period and with a similar style with former Collège Municipal Français in Shanghai. Another series of building is now hosting the regional government and was I guess the former French colonial administration. Besides these administration buildings, I also saw a few typical French villas (see picture) actually quite similar to the FONCIM houses designed by Leonard & Vesseyre in Shanghai former French Concession. 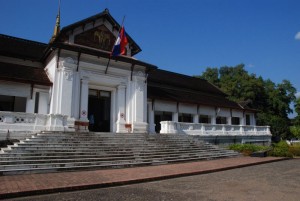 The main architecture feature of the city(apart from the wonderful temples), is the former royal palace, now a museum. Built by the French in 1904 it is a combination of French Beaux-Arts with decoration elements of the Lao culture. Although the outside, in particular the front roof  and the golden conical central park looks very much Asian, the interior of the palace, the back and the gardens are clearly of French inspiration. The palace features extensive Gaugin-like style murals by French artist Alix de Fontereau.

Most of the colonial houses were built in the late 1930’s or early 1940’s but Art Deco never came up the river. Although the ensemble is very charming, not much effort was put into the decoration as most of these buildings were utilitarian, shops and houses for the residents. They are now all turned into bars, cafes, guest houses and tourist offices creating a nice atmosphere at night.

One beautiful exception is the beautiful house now hosting the French institute in Luang Prabang. Just like the Palace the building layout it typically western but the outside decoration is inspired from Laos architecture. The geometrical motives used is very much Art Deco, making it the one of its kind in Luang Prabang.

One thought on “Luang Prabang”