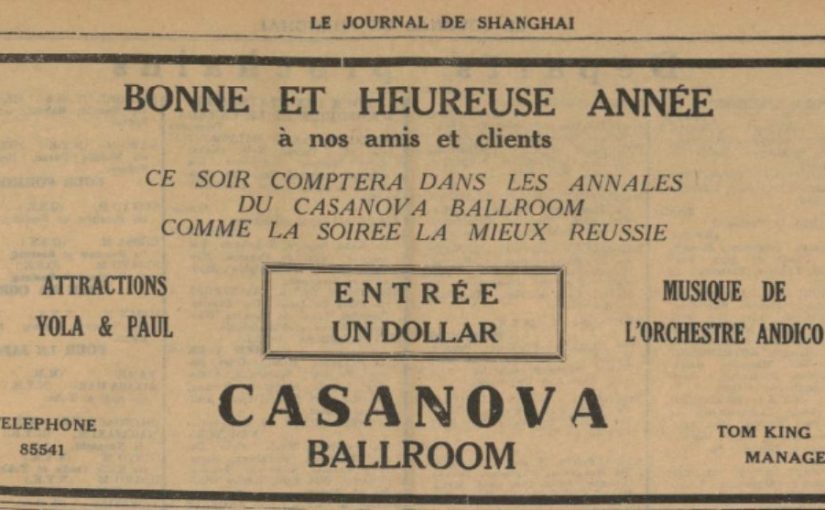 As Shanghai grew as a metropolis, in the first half of the XXth century, transportation problems were are a serious issue, just as they are today. Although the city was not united but cut in three sections (the International Settlement, the French Concession and the Chinese City), investments were made for the city to develop. The first phases included actually paving the roads and building the dam to stabilize the Bund. As the city extended westward, much larger scale investments were required.

The fast growing city considered having tramway as early as 1898, but it is only in 1908 that the network actually opened. Three networks were created, ‘Shanghai Tramways’ run by the Shanghai Electric Construction Co Ltd in the International Settlements, ‘La Compagnie Francaise de Tramways et d’eclairage electrique de Changhai‘ in the French Concession and the ‘Chinese Tramways company’ in the Chinese city. Originally, the line were connecting, but not tracks were not crossing from one part to the other, so passengers crossing a border had to disembark and get into the car from the next company. This was changed later, see below). Just like today’s metro, Shanghai tramways were essential for the life of the city.

– Down the Bund: The tram line was crossing the Suzhou river at the Garden Bridge (or Waibaidu Bridge) going all the way down the Bund down to the French Bund where it connected to the French Concession network. Not all lines were going the whole Bund down, but line number #2 from “Bubbling well road” (today Jing An Si), to ‘” “Marché de l’Est”, at the end of “Rue de la porte de l’Est”, today Dong Men lu.

– Nanking Road / Bubbling well (currently Nanjing Road East and West): Crossing the international settlement from East to West, the line went up to Jing An temple. As indicated on picture left, this was tramway line number 2. It had a very similar route to the today’s metro line #2 and part of Tramway line # 20

There was also other lines going down Seymour Road / Avenue du Roy Albert (the current Shaanxi Bei lu and Shaanxi Nan lu. The same road is still followed by a trolleybus line.

Picture right is a Shanghai tramways ticket from Old Shanghai. Although it is difficult to date, it is clearly from the 1930s or before. The ticket shows 8 possible routes (a 1931 list shows 11 routes so it probably from the 1920s). This ticket was punched for route 5, “Railway station to West Gate Via Boundry, North Chekiang, Chekiang, Hoopeh and Rue Hue”.

Along with the tramways, the Shanghai Electric Construction Company also built a network of “Trackless trolleys” in the 1930s. Shanghai also had a competing bus network, green double-decker vehicles very similar to the ones used in Britain and in Hong Kong. They were operated by the China General Omnibus Company.

Shanghai tramways were stopped in the 70’s and the tracks removed but as seen above current lines often follow the same route as the old tramways.

More about tramways in other Chinese cities with this article from Paul French’s blog:
http://www.chinarhyming.com/2009/02/25/chinas-old-tram-systems-a-quick-round-up/